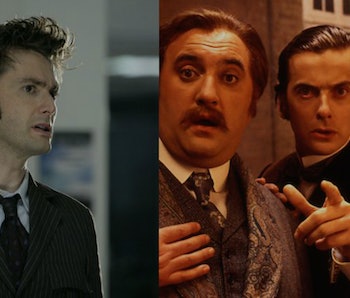 Even Sherlock Holmes could have trouble deducing the complicated past of a Time Lord. Luckily, the great detective and the time-traveling Doctor have actually shared a face. If it turns out Sherlock Holmes ever regenerated into the Doctor, or vice versa, new compelling evidence has recently emerged linking the Doctor Who alien from Gallifrey to the hero of Baker Street.

As a BBC Doctor Who blog pointed out, incumbent Doctor Peter Capaldi guest starred on The All New Alexei Sayle Show — a comedy sketch hodgepodge from the mid-‘90s — as the Sherlock Holmes opposite Alexei Sayle’s Dr. Watson. The sketch itself is just over two minutes, but it still manages to fit in some of Capaldi’s signature “done with your shit” humor. He plays a put-upon Holmes while Sayle portrays a Watson obsessed with Holmes’s ability to “deduce” even the simplest of things. Capaldi’s dry wit, a hallmark of his 12th incarnation of the Doctor, is foreshadowed in his faux-Holmes portrayal too.

There have always long-been comparisons between the Doctor and Sherlock Holmes. Both are British characters who are confident problem-solvers with long-standing and complicated histories. Matt Smith’s 11th Doctor even dressed up as Holmes and deduced things (inaccurately and ridiculously) in “The Snowmen,” while the Lizard-person and friend of the Doctor, Madame Vastra, acts as a Holmesian figure in several episodes. The fact that Capaldi briefly played Holmes before playing the Doctor only connects the characters further.

But despite all that, the most arresting detail of this resurfaced footage of Peter Capaldi as Sherlock Holmes is the fact that he also looks a lot like David Tennant, the fan favorite actor who played the 10th Doctor. If this isn’t obvious evidence of an ongoing time distortion, we don’t know what is.