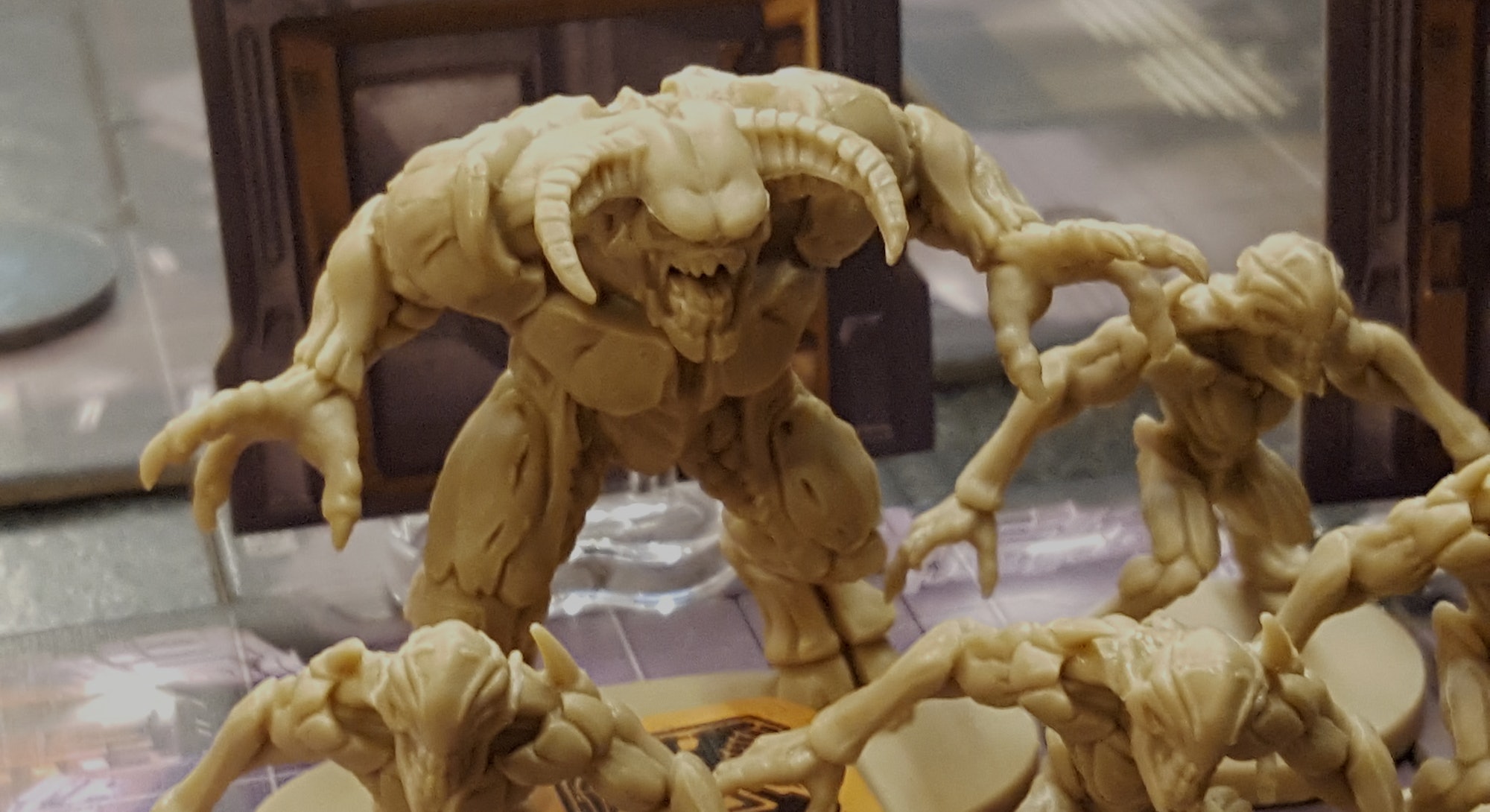 There is a genre of board game in which one player stands alone against all the others. The odd man out plays the role of an adversary, who has large numbers of squishy troops at his or her disposal. The names of the adversary are legion and capitalized sinister things like Overlord, Invader, or Imperial Commander. In the kinetic new DOOM board game, between one to four people play space marines who want to complete heroic missions while surviving whatever a Bad Dude throws their way.

This Bad Dude is a general pusher-arounder of many plastic and evil minions. I’ll admit upfront that I find playing the Bad Dude to be tremendous fun. The way I see it, pushing lots of plastic minions around a tiled board is better than pushing around just one. Plus, the Bad Dude gets to read the game manual and therefore has a better sense of what’s going on. Also, if you have existential concerns that your playgroup “has fun” more than you do, the Bad Dude can play more aggressively or intelligently or stupidly. You also have the option to cackle a bit while you do so.

The genesis of this one-vs-all strain goes back to the dungeon masters of pen-and-paper yore. One of the earliest games to upgrade paper to cardboard was HeroQuest, a tabletop staple of the late ‘80s, early ‘90s; HeroQuest remains, according to one bearded YouTube sage, “the best game ever made” for its inclusion of gargoyles and broadswords.

A very recent permutation — lacking swords and goblins, though its own roots twist back more than a decade — is DOOM: The Board Game. It is a fortuitous mutation as these things go. The Bad Dude in DOOM, the Invader, gets all sorts of nasty demons to spawn: An obese man with cannons for arms; floating psychic balls with giant mouths; a few fellows who do a great horned-Lord-of-Darkness impression. The miniatures are fantastically rendered, perhaps the best that publisher Fantasy Flight has yet produced. The good dudes get a variety of rifles, other projectile weapons, and a chainsaw with which to dismember the horde. They look spiffy while doing so, too. One of them has a minigun.

The gun-and-guts video game Doom was first translated to the tabletop in 2004. The board game system was fairly straightforward: Move across a tiled board, roll to attack, don’t run out of ammo, repeat. This straightforwardness meant adaptability. The system that powered Doom, in turn, became the basis for the fantasy game Descent: Journeys in the Dark in 2005. A second edition of Descent was released to critical acclaim in 2012. The Doom board game system transmogrified once again in 2014, into the excellent Star Wars romp Imperial Assault. Most recently, the system strafed back to its DOOM origin at the very tail end of 2016.

Board game designers learned a trick or two in this 12-year-long tabletop ouroboros. If you are new to, but excited by, the one-versus-all concept, I would certainly recommend DOOM as an introduction but with a caveat, which I’ll get to in a moment.

Like a great first-person shooter, the board game DOOM strips away unnecessary bloat. It knows why youre tromping through cardboard Mars and Hell: to kill things dead.

The core of DOOM’s gameplay is combat, which is a zippy affair. Gone are concerns about ammo. Gone even are the marginally more complex line of sight rules that emerged in Imperial Assault systems. To blast an enemy, you simply have to fulfill two conditions: If a target is within range, counted by squares on the board, and if you can draw a single unbroken line from the attacker to the defender. Roll to see how much damage the attacker does, flip over a card to see how much damage is blocked, and that’s that.

The Invader has a straightforward activation system. Select a group of minions, move them, and attack. The space marines have more of a puzzle in the form of a hand of cards reflecting which weapons they have. (There’s a starting loadout, plus you can pick up more powerful guns as you run around the board.) These cards let you take actions: a strafe, a shotgun blast, a swing of the chainsaw. The trick is to string those together in creative and bloody ways. Otherwise, the sheer number of minions will likely prove too much.

On the marine team’s side, too, is the Glory Kill innovation. It is simple and authentically DOOM-y: The good dudes have the ability to stomp weakened monsters to death, and are awarded with a card from the Glory Kill deck. (Perhaps one of the only quibbles with the game is that there are so many various decks, and not all of them are clearly explained except via matching their card backs to a diagram at the front of the rulebook. You’ll get the hang of it after some slightly irksome page flipping during early games.)

But that caveat I mentioned earlier: If the demons and demolition theme does not immediately grab you by the throat, there very well might be a different all-versus-one game that does. If you are a Star Wars fanatic, Imperial Assault will likely give you the superior game experience unless you want to avoid the meatier meta-tasks of progression and experience awarded, and focus on unadulterated, direct-from-the-powder-keg sci-fi combat.

If you want one-vs-all Conan, well, there’s a board game for that too. The expansions to Descent are legion. If you want to focus on stealth rather than the constant frenzy of dice-rolling combat, there’s Fury of Dracula. I’ve heard HeroQuest has dwarves.

And a recently released Teenage Mutant Ninja Turtles game, as improbable as it sounds, is supposed to be quite good; it was designed by the very mind — that of Kevin Wilson — behind the original Doom board game. (I haven’t played it yet, so I cannot offer a strong opinion one way or the other.)