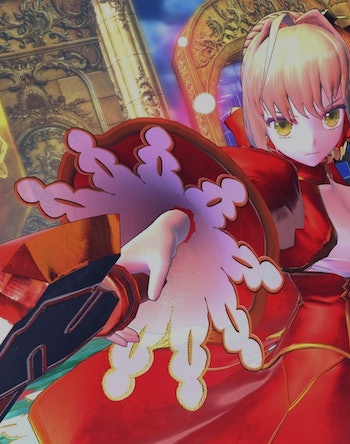 Think back to all the things you learned in history class and toss that knowledge into the trash because Fate/EXTELLA: The Umbral Star is to historical accuracy as La Croix is to water: outrageously flavored and effervescent.

The premise centers around a fictional war between magicians fighting over the historical Holy Grail, which will supposedly grant a single wish. In order to fight with one another, these magicians summon spirit versions of historical and mythological figures like King Arthur and Alexander the Great to partake in gladiatorial combat. Given Kinoko Nasu’s interesting premise, Takashi Takeuchi’s unique character designs, and the ability to romance King Arthur, Fate/Stay Night was an instant hit with gamers and a win for historical fan fiction.

Fate/Extra takes the Holy Grail War/Mythical Magic Partner template and gives it a sci-fi twist, overlaying the general premise with magic-infused A.I and virtual realities. As a magician, your character is still partaking in the Holy Grail War, only the battles take place in a Matrix-like virtual space, and your magical partners are explained away as A.I. that is highly sophisticated. Rather than partnering with a female King Arthur, players are instead paired with a female Emperor Nero, a noted Roman Caesar and madman who locked up his citizens within the Colosseum so they’d be forced to listen to him sing opera.

The whole story of Fate/EXTELLA: The Umbral Star wouldn’t make much more sense than the Fate/Stay Night games if you’re unfamiliar with the series as a whole, but Extella in particular should be considered an alternate take on the main series.

As it’s a direct sequel to Fate/Extra, Fate/EXTELLA might be best left played only after completing Fate/Extra. If you own a PlayStation Vita, Extra is available for download through the PSN store. However, a simple Wiki search will help fill in the story if you’re curious enough, because Fate/EXTELLA does have a draw for those simply looking for a new action RPG to play in that it forgoes the RPG gameplay of Fate/Extra and turns the Fate series into an action game — so fans hungry for a Japanese action RPG will no doubt be excited for EXTELLA.

Specifically, Fate/Extella is a “musou” game, named after the popular Dynasty Warriors franchise. “Musou” games are action-heavy combat games where players take control of warriors and have them fight large waves of enemies, conquering territories on the map and eventually facing a boss character for the chance to claim victory on the battlefield. The gameplay itself has its own share of dedicated fans, so even if you’re unfamiliar with the frankly long and complicated mythos of the Fate/Stay Night series, Fate/EXTELLA offers a rare treat for dedicated fans of another subgenre of action RPG games.

While the combat in Fate/EXTELLA is typical of what you’d find in most “musou” games — chaining combos out of quick, heavy, and special attacks — EXTELLA offers a few, series-specific bonuses. A character’s ultimate attack is a grand spectacle known as their “Noble Phantasm,” which is a special attack that’s related to a character’s history or lore. In the case of Nero, enemies are locked in a grand Colosseum as the Emperor unleashes a barrage of attacks, a reference to the real Nero’s history.

That kind of historical “animification” is my personal draw to the Fate series. There’s a joyous, silly fun to be had with seeing historical characters like Elizabeth Bathory reimagined as a half-dragon J-Pop star, even if the character designs lean heavily into anime fan service territory. Frankly, the whole game is rife with anime cliches, including a Persona-style social feature that allows you to flirt with your tyrannical Roman partner.

The audience for these kinds of games is mostly pre-established. Chances are you already know whether you’re going to buy Fate/EXTELLA: The Umbral Star. The PlayStation 4 entry to the Fate series isn’t necessarily the most friendly entry point for newcomers. However, if you’re interested in the series and the rich, complicated lore outlined by Nasu, the Fate series is surprisingly accessible; the animated shows stream online on services like Netflix, and the original games are also available online.

Fate/EXTELLA: The Umbral Star for its part offers a complete package with crisp graphics, engaging gameplay, and a silly story that relies a bit too heavily on anime tropes. But if you can find the fun in the historical revisionism of the Fate series, there’s a lot to find charming in Fate/EXTELLA.

Fate/EXTELLA: The Umbral Star is available now on PlayStation 4.