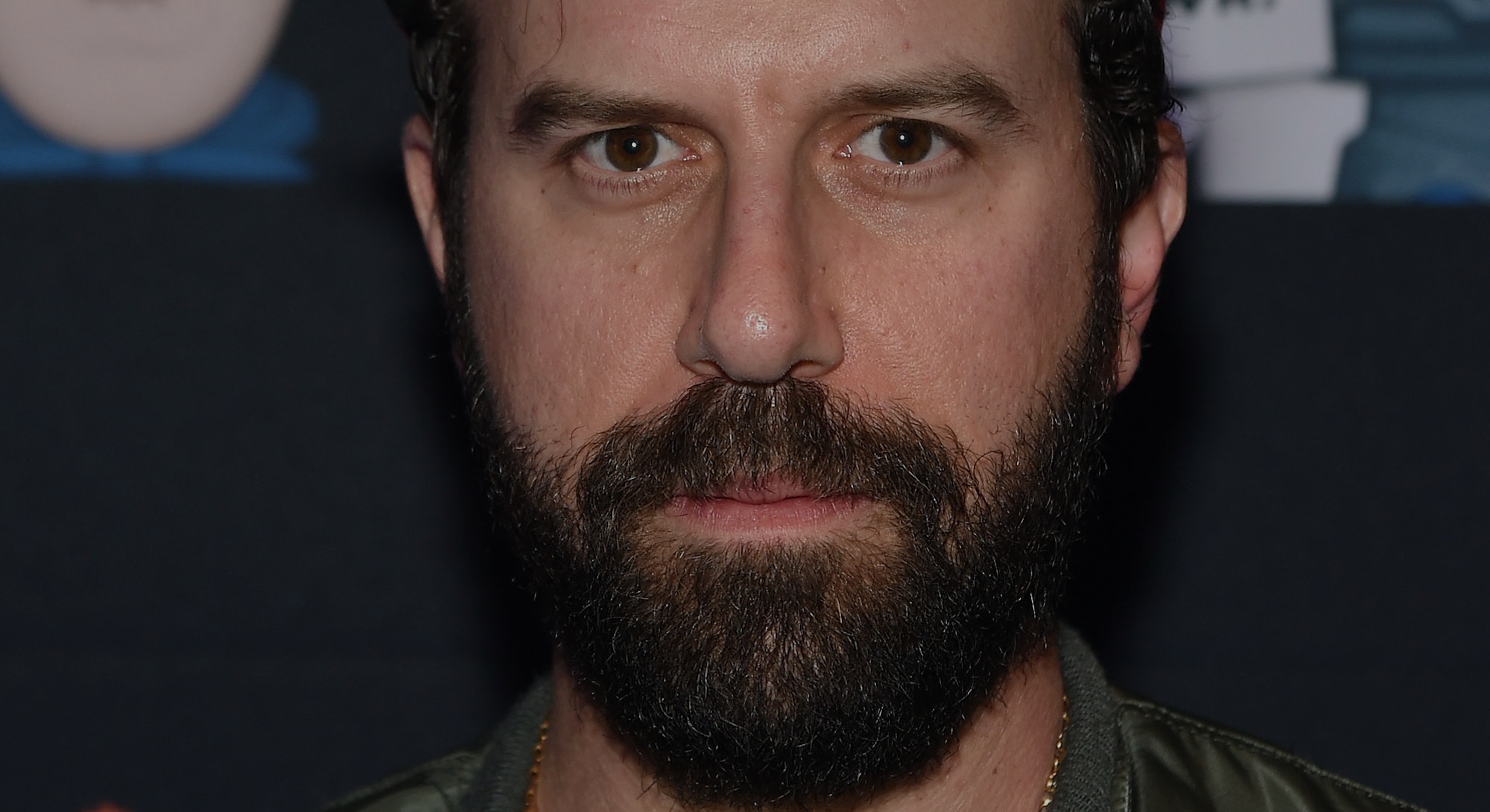 Brett Gelman is fucking everywhere. Nearly a decade after moving out to Los Angeles to join the growing alt-comedy scene, the 40-year-old’s deep voice and knack for playing desperate — and sometimes slimy — characters has earned him an IMDb page filled with stuff your coolest, weirdest friends have been telling you to watch.

Just last year, Gelman had major roles in the TV comedies Blunt Talk, Love, Fleabag, Another Period, and TripTank, and before that, he was a regular on Married, Eagleheart, and Go On. He often plays a creep, but the character usually has a heart of gold (or at least underlying justification for his shitty behavior). His best work may be his Adult Swim Dinner specials, in which he plays a well-intentioned but incredibly tone-deaf version of himself that makes everyone uncomfortable.

Gelman left Adult Swim this fall after a network executive made controversial comments about women writers (read: they didn’t like hiring them). The exit was a high profile one, and part of Gelman’s effort to take a stand against racism in the industry. And it hasn’t hurt his productivity. He’s got a whole slew of upcoming projects including Lemon, a Sundance film he co-wrote with his wife, Janicza Bravo, and the Comedy Central animated series Jeff & Some Aliens.

A zany and often deeply satirical cartoon in the vein of Rick and Morty with a twist of South Park, the show is spun out from a segment in Sean Donnelly and Alessandro Minoli’s TripTank. Gelman voices Jeff, a sad sack who works at a juice bar in the mall and is being studied by a trio of goofball aliens who have pinpointed him as the most average human alive. It’s an edgy show with a dose of empathy, mixing cynical commentary on the state of America with a story of a guy who can’t get out of his own way. Gelman spoke about the show with Inverse, as well as his high-profile political stances and plans to tackle the Trump administration through comedy.

In the first act of the first episode, you kill an old woman, so you really waste no time getting into shit here.

Yeah, we keep it real. We keep it in line with America’s violent intentions.

And yet, Jeff, the character you voice here, is a little more hapless than he is an asshole.

Not that he doesn’t create some of the situations that he finds himself in, or he definitely makes it worse, but he’s very much … He’s probably the biggest victim I’ve ever played. It’s fun … So much of the character is him just reacting to horrible things, and him trying in a very panicked way to figure it out, and it’s good to not be the aggressor.

Do you find yourself getting offered that kind of role, for the most part?

The first question I ask is, “Is the material great?” And if the material is great, I do it. This is some great material. But there are things that I say no to, where I don’t think the writing is good enough to justify my playing a character that I have played before. It really does at the end of the day come down to whether I like the writing or not. If it’s great, then you’re going to find the way in which this character [who] is an aggressor is different than how other characters I’ve played are aggressors. And then it’s also up to me a little bit to differentiate what I do or decide not to.

You definitely play an aggressor in Dinner in America, the satire special you did this summer, as a well-meaning white liberal whose subconscious racism gets exposed. And watching it now, post-election, it feels like the topic has blown up even more, and could be even crazier if made today.

Yeah, well, in a way. It blew up for white people in the last six months. The situation has been a constant for people of color. A lot of people would say to me, “Man, great timing!” And I was like, “Uh, it’s been great timing for forever.” Or like, “Hot issue, man.” And I would be like, “Well it’s been a hot issue for 400 years.” It’s just the media chose to cover it more this year, with our president-elect, and with police violence being publicized more, and being filmed. But I still think that we’re perpetually moving away from the full knowledge of that reality, so [writing partner] Jason Woliner and I wanted to make something that made all of us face what maybe our part in it was.

You said something interesting in an interview last summer about how talking about injustices, or sharing something on Facebook or making a joke about it, isn’t the same as actually doing something about it, and that’s a problem that white liberals have — as the election proved.

Yeah, you know I still think it’s a problem. I still think everybody’s tweeting, but it’s like, “I’m sorry to tell you man, your tweets, they don’t do shit. They don’t do shit.” You being like, “Hey, stop that!” only makes the other side of that stronger. “That’s not nice!” I think that a lot of liberals are being sucked into social media and thinking that they’re using it as a way to feel like they did something. And I think they’re still doing that, I don’t see how reposting things about our president-elect helps at all. It’s like, well the people that agree with you know this already, and the people who don’t agree with you think this is a lie, that you’re wasting your time. Use your influence, go out there, donate, meet with groups, educate yourself on what it’s like to not be a rich, straight white dude in the United States, and do something!

It’s become so evident that it’s really tricked us into thinking, “Hey, my voice is heard! And that moves the needle.” No, it doesn’t. And I speak from experience in that. Nothing I ever really said on Twitter ever did anything.

Especially because Facebook will show you what you want to see.

What does that mean for you, for comedy, for people who do create the entertainment? Do you feel like your work has to reflect the political reality?

I definitely think that that is our job, to put it in our work. I don’t think everybody needs to make a direct political statement, and I definitely don’t think that people should do that in a forced way, because then that hurts the cause. But I think people should be more mindful, and we definitely need to keep moving towards inclusion [in casting and production] and be even more aggressive now that there is a very loud voice saying that the need for inclusion is actually an act of racism, which is insanity, and just manipulation. It’s not even insane, it’s just manipulation! I think [Twitter] being mastered as a tool for bad has overwhelmed its function as a tool for good. It’s just like, if I’m an artist, I don’t need to tweet about my stuff, I can talk to you about it.

I don’t think that everybody should think like they have a chance to be famous. I think that there needs to be separation between what people’s jobs are. Part of my job is to reach a lot of people. That’s not everybody’s job, that doesn’t make me better than these people, but these certain circumstances, for better and for worse, come with my job description. I am making things for an audience, you know? Somebody who works a different job does not have an audience, they have singular clients. Fame is a byproduct of my position; it’s not a thing to be cultivated like that. I need an audience that want to see my work. So those are the circumstances of my job, so the fact that everybody wants that is I think delusional and at the end of the day, destructive for people’s psyche.

So do you try and be more cognizant and work hard to instill those themes, or do projects that are more political?

Yeah, I think so. I think it’s a balance. In the end it’s like, you’ve got to do something good, and sometimes it’s good to make something that’s just entertaining for people, but I do think I do plan for my work, especially what I write and produce, to have at least some sort of political consciousness, and definitely be inclusive. The whole nature of comedy to begin with is like John Waters said, everything that is comedic is political. When you make somebody laugh, you’re shifting their perspective. So yeah, I think it’s a time for major consciousness, and if you’re not being conscious, you need to be conscious about the fact that you’re not being conscious.

You mention the crew is all white in the Dinner special, and then fire them.

When we were making that, it was very important for Jason Woliner and I to have a diverse crew, and then we were like, “Wait a second … “ We had to kind of call ourselves out on our own racism and be like, “Oh wait, why did it wake us making something about race for us to realize that we needed … not an all white crew?”

And that’s the same with *The show is not making fun of people like Jeff, like me and Alessandro and Sean all have a Jeff inside of us. We are all that guy who just wants to get everything in an easy way, and doesn’t deal with rejection well at all.

Yeah, exactly. With every character, it’s like, “Well, I am this person.” You have to see yourself in them, no matter how reprehensible they might be, and I don’t think Jeff is reprehensible. I’m talking about certain other characters I’ve played.