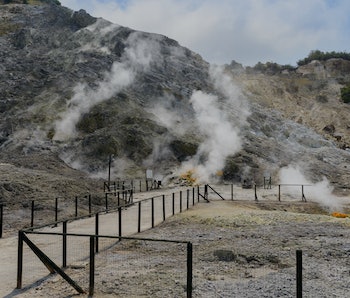 About 40,000 years ago, the last sparse Neanderthal communities roamed Europe, their numbers dwindling as Homo sapiens encroached on their territory. Times were hard, and about to get worse.

That’s when supervolcano Campi Flegrei erupted, spewing 70 cubic miles of magma out of the belly of the Earth, covering 1.4 million square miles with the ejected material. It was the largest eruption Europe has seen in 200,000 years. Today, researchers suggest that the Italian supervolcano may be reawakening, leading to renewed fears of catastrophe.

But at the time of the great Campanian Ignimbrite eruption, as it is known, local Neanderthals would have had no warning. As far as we know, none of the remaining populations would have been close enough to Campi Flegrei to witness the eruption directly, although they certainly saw and felt its effects.

“Sunsets would have been dark red for a year after the eruption due to sulfur in the atmosphere — imagine what that must have been like to see and wonder about,” volcanologist Benjamin Black tells Inverse by email. Black and colleagues recently modeled the environmental and climate impacts of the eruption, finding that between 50 and 250 million tons of sulfur dioxide was blasted into the stratosphere, resulting in acid rain and cooler temperatures across parts of Europe, Asia, and North America.

“Both humans and Neanderthals — even if they were living far from the eruption — would certainly have experienced especially harsh and unusual conditions for several years after the eruption,” says Black.

The timing of the last known Neanderthal settlements in Europe coincides suspiciously with the Campanian Ignimbrite eruption, leading to ongoing academic debate of the volcano’s role in the demise of our hominin relatives. But the research of Black and others conclude that if the eruption was the nail in the Neanderthal coffin, it’s only because the population was already on the brink.

“The situation for Neanderthals was dire by the time of the Campi Flegrei eruption,” says Black. “Their human cousins were steadily encroaching, and the territory occupied by Neanderthals was tenuous at best.”

Black’s research found that the worst climate impacts occurred away from regions of human and Neanderthal settlement, largely to the East over what is now Russia, where average temperatures may have dropped as much as nine degrees Celsius. The parts of Europe where hominins were competing for space and resources likely saw temperature declines between three and five degrees. That would have made life harder, for sure, but it wasn’t unsurvivable — a fact made clear by the continued existence of Homo sapiens.

“It is hard to say just how close to the edge Neanderthals were by the time of the Campanian Ignimbrite eruption, and what might have been enough to finally push them past the tipping point. We do know that ecosystems and societies are complicated, and it’s possible the eruption gave Neanderthals a critical shove.”

While new research certainly has renewed concern over the destructive potential at Campi Flegrei, a new supervolcanic eruption is not imminent. Italian officials have raised the threat level from green to yellow, which translates roughly to “requires more monitoring and study.”

However, if the volcano were to spring back to life, the consequences could be devastating. Today half a million people live in the vicinity of the caldera — the depression in the Earth left behind by the Campanian Ignimbrite eruption.

So while the reawakening of the supervolcano doesn’t threaten the survival of our species, a large eruption would certainly throw the planet and its inhabitants into a great deal of turmoil — as it did for our ancestors 40,000 years ago.