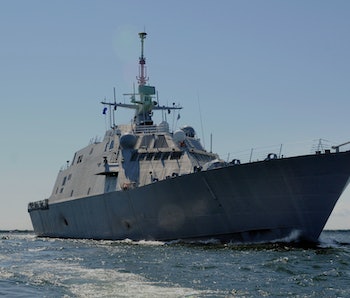 The worst of typos can have dire consequences. Thankfully for Yahoo Finance, its major mistake resulted in a slew of memes instead of a boycott by the internet.

An apology was issued soon after. Yahoo Finance tweeted out, “We deleted an earlier tweet due to a spelling error. We apologize for the mistake.” Some pointed out that the “b” and “n” key are right next to one another, so it very well could have been an honest mistake.

The damage was already done, but instead of Twitter calling for the head of the person behind the egregious error, most people turned the situation into something they could have a chuckle about. Thankfully, the mistake has been preserved in screenshots.

Typically, a racial slur isn’t something to laugh at. But in this particular situation, Twitter lit up with jokes about Yahoo’s forecasted Trump navy.

Yahoo Finance was most definitely shaken by its own error

Meanwhile, some were looking for someone to blame

Others just wanted to throw themselves into some flaming hot lava

With Russians becoming the go-to scapegoat

And, thankfully, most white people stayed in their lane

The situation could have obviously gone very badly for Yahoo Finance, but clearly most didn’t take too much offense from the accident. Everyone makes mistakes on Twitter, even the president-elect. Anyway, did anyone even end up reading the original article?

More like this
Gaming
8.2.2022 5:27 PM
"Woke" GTA 6 is the best thing that could happen to the franchise
By Willa Rowe
Culture
8.7.2022 6:00 PM
46 Popular Home Upgrades People Are Making That Are Under $35 On Amazon
By Jamie Lerner
Culture
7.31.2022 6:00 PM
Clever things for your home that people call their most amazing finds of the year
By Cassandra Seale
Related Tags
Share: