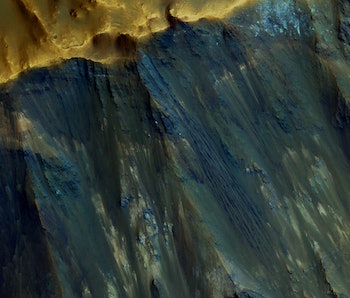 We don’t often get to peek below the surface of another planet, but thanks to a fleet of robotic spacecraft sprinkled throughout the solar system, we occasionally get lucky. Impact craters can expose subsurface materials, especially on steep Martian slopes, as seen in this new enhanced-color image from the Mars Reconnaissance Orbiter (MRO).

We generally assume that Mars is red through and through thanks the ruddy dirt caked into the surface, but that’s not entirely the case. Some of the best places to look at varied terrain on Mars is in impact craters. Rockfalls and debris avalanches occur frequently in Martian craters, and help to keep the surface dust-free. Here’s where we can feast our eyes on many different types of rocks, in an array of colors, as seen in the image below.

The image is a typical view of Martian highlands, which once hosted lava flows, and water-lain materials. The stark contrast of the dusty crater rim and subsurface is evident in the top of the image by the striking color differences. Underneath the dusty surface are rocky deposits — a mixture of jumbled and layered bedrock that has been altered by countless impacts over billions of years. The long streamers of material are downward sloping debris streaks, and not to be confused with recurring slope lineae (RSL) — a sign of water on Mars.

A planet’s history is hidden in its impact craters, or lack thereof. The surface of Mars is littered with more than 635,000 known impact craters — over one kilometer wide — highlighting a violent past. Scientists use these craters to help them date planetary surfaces. The more craters a planetary surface has, the older and less active it must be. For instance, Pluto shocked the world in 2015 as scientists expected to see a cratered, lifeless hunk of ice. Instead, the world got a glimpse of a relatively smooth surface on Pluto, and evidence of geologic activity.