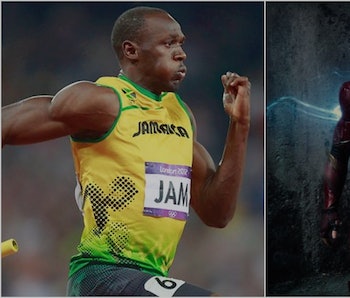 Call it too “on-the-nose”, but at this point in the DC Extended Universe, a cameo from Usain Bolt in The Flash would do a lot of good in lightening up DC’s dour superhero universe.

During an interview for I am Bolt, MTV brought up whether or not the sprinter would be open to a possible cameo opportunity in a superhero film. “Let me talk to some people,” said Bolt, revealing it would be “very cool.”

“Maybe The Flash?” joked Bolt, referring to the fact that both of them are speedsters. “It would always work to be the fastest man, you know what I mean? So it would always work to be Flash Gordon, or something.” Mistaken references to the wrong Flash aside, Usain Bolt’s status as the fastest man alive means that he wouldn’t just be a good fit for a Flash cameo, but as a natural showman, he’d bring a little levity to the DC universe.

Miller’s Flash is already set-up to be the comic-relief in the DC Extended Universe, cracking jokes in both his Suicide Squad cameo and his appearance in the Justice League trailer. Having Bolt interact with Miller’s take on the Flash would be a comic delight.

As for who would win in a race between the two? Usain Bolt currently holds the world record speed for both the 100 metres and 200 metres at 9.58 seconds and 19.19 seconds, respectively. Meanwhile, Rhett Allain at Wired theorizes the Flash’s speed at around 316 m/s, which obviously dwarfs any human speed possible. However the Flash is a fictional character, so it’s not like Bolt has to worry about his world records anytime soon.