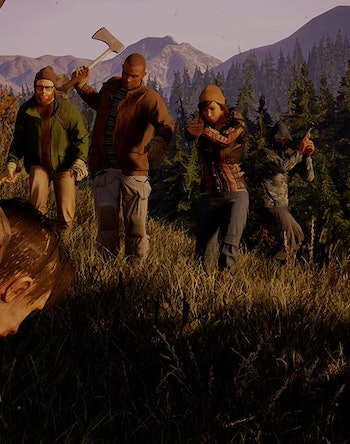 Multiplayer games are hitting their peak in 2017, so it’s a great tis a great time to be a fan. This year looks to see a major surge in cooperative multiplayer games where players work together on campaign missions instead of just having them fight other people in a giant sandbox. Whether you’re a hardcore online gamer or someone looking for an easy game to play with friends, there’s a lot to be excited about this year.

What’s responsible for this rising number of four-player co-op games? It could be due to the rise of board games once again, or the effect of “toy-to-life” games like Skylanders, or maybe players got tired of single-player games with tacked-on arena battles. In any case, it’s pretty great to see an increase in options with multiplayer gaming. Here are some of the most awesome games with multiplayer options that are coming out in 2017.

For Honor from Ubisoft Montreal is without a doubt one of the most anticipated games of 2017. It’s vikings, samurai, and knights banding together to defeat the warlord Apollyon. Seriously, what’s more epic than that? You can play through the whole campaign cooperatively with up to four players, or go head-to-head in a variety of duels and brawls.

This is coming into the picture at a bit of a disadvantage. The original Halo Wars, a real-time strategy game, wasn’t too well received when it came out in 2009. Since then, we’ve gotten a ton of improvements in the genre, but we’ve also seen a significant rise in multiplayer online battle arenas like Heroes of the Storm, which could dilute Halo Wars 2’s success. In any case, the sequel introduces a new alien faction called the Banished, so that’ll be pretty cool.

State of Decay 2 may be “another zombie game,” but this one incorporates elements of Telltale’s The Walking Dead and even the board game Dead of Winter, having groups of players work together to build lasting communities instead of just having them wander through tunnels by themselves. You can even venture out in groups of up to four players on campaign missions, so you never have to fight zombies alone.

Multiplayer virtual reality is still a very new field, and Star Trek: Bridge Crew could help launch it into the mainstream. The game puts you and three friends in command of a Federation starship to explore the Trench, an uncharted sector of space. All four players must work together to chart the sector and figure out what the hell the Klingon Empire is doing there too. It’s a co-op game that’s completely immersive, and early reviews have been promising.

Absolver is an MMORPG that has absolutely no firearms. Instead, players have to rely on their melee abilities, using swords, fists, or defensive strategy in order to fight in PvP or PvE environments. I will admit, it’s actually kind of fascinating to see how players behave when projectile weapons and magic are taken out of the picture. Definitely makes things more hands-on.

The sandbox game, set in a futuristic city, will let the player destroy everything they see, which is a pretty huge undertaking. So it’s no surprise that a few days before last year’s E3, Crackdown 3 was delayed until 2017 so the developer could work on the online multiplayer experience. There’s still no confirmed release date, but give me a world where everything can explode and I’m happy.

In a surprise move, famed game designer Hideki Kamiya made it so his latest adventure, Scalebound, is cooperative from start to finish. Up to four players can travel through the entire game together, finding treasure, and defeating baddies while showing off their freakin’ fighting dragons. Cue Daenerys quote here.

Sea of Thieves is a multiplayer co-op game where groups of friends can join together and go plundering the high seas while battling other pirate gangs who are after the same treasures. The animation is fun and colorful, and it definitely looks like something that adults and kids can play together.

For those wanting a pirate game that’s a little more mature, Blackwake is a multiplayer team-based shooter that’s centered on exciting and violent naval battles. Funded on Kickstarter, the indie game brings players together in massive battles, focusing on team-based tactics and cooperation while also encouraging quite a few F-bombs when Larry fires the cannon early.

This is the tenth — yes, tenth — installment in the Tom Clancy’s Ghost Recon franchise. But it does have one unique feature: It boasts the series’s first open-world environment. It’ll no doubt make things a little more exciting for the four-player co-op multiplayer, where players can work together to complete missions.

Project Arrhythmia is a gorgeously simple rhythm game where up to four players can work side-by-side in avoiding the musically timed pulse of blocks and bars. It’s a nice, calming break from all the first-person shooters and strategy games. Plus, the music is really pretty.

One of my first war games was Medal of Honor, and it’s been awhile since a tried-and-true WWII shooter has gotten my attention. Batallion 1944, funded on Kickstarter, has created a beautiful tribute to the multiplayer shooters of the past while also giving us a new take on one of history’s most visceral wars.

Toejam & Earl: Back in the Groove

Toejam & Earl was one of my favorite video games growing up, so naturally I was psyched when Back in the Groove was funded on Kickstarter. This newest installment features four-player co-op multiplayer, along with a host of new playable characters. The game’s been delayed a few times, but is finally set to come out in 2017, and I couldn’t be more psyched. Hyperfunk Zone!