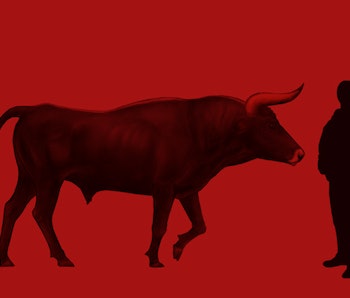 In addition to famine and harsh weather, ancient pre-Europeans had another huge problem to deal with: 2,200-pound, seven-foot-tall massive cattle known as aurochs. These belligerent, horned giants bulldozed through swaths of vegetation and posed a serious threat to early hunters. Eventually, these giants were overpowered by human might, and they went extinct in the 1600s.

It was thought that aurochs would never again walk the earth, but now a genetic engineering project called Operation Tauros is bringing them back from the dead.

Since its inception in 2009, the project, spearheaded by a team of European scientists, has successfully produced 300 calves whose genomes are a combination of present-day cattle DNA together with the genes from aurochs. This intermingling of genomes is the result of a genetic engineering technique known as “back-breeding.”

To produce aurochs — well, technically, auroch-like animals — the scientists first find existing cattle whose genomes have plenty of overlap with those of aurochs, then extract genes from auroch DNA and insert them into the cattle genome. As the Telegraph reports, scientists have identified Italy’s Maremmana and Podolica cattle and the Balkan Busha breed as subspecies of cows that are sufficiently auroch-like. This technique is being used by other scientists to produce woolly mammoths using African elephant DNA as a template.

Operation Tauros is commendable for its successful implementation of a complicated genetic engineering technique. But despite its technical achievements, one question remains: Why are we trying to bring enormous, aggressive, terrain-flattening cattle back to the European continent?

It seems that the scientists behind the project, together with those working with the conservation movement Rewilding Europe, believe that bringing back ancient animals like the auroch — together with wild horses, ibex, and wisent — will restore overfarmed regions of the continent’s landscape to their natural, animal-trampled state. Doing this will allow for “much more space for wildlife, wilderness and natural processes,” the conservation movement’s project website states. In addition, it’s hoped that these “re-wilded” areas, branded as European safaris, will draw in wildlife tourists, bringing much-needed income to rural communities.