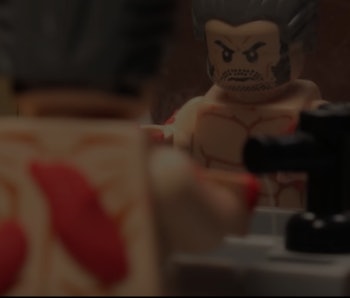 The debut trailer for Logan might be one of the pop culture highlights of 2016. The strength of its soundtrack alone made sure that anybody paying attention to the biggest bits of entertainment in 2017, would be paying attention to Logan. The trailer is so strong, it was remade entirely in Legos and is somehow just as moving.

Set to Johnny Cash’s famous rendition of “Hurt,” the trailer for Logan immediately places the film in a different context from its official predecessors, X-Men Origins: Wolverine, and The Wolverine. Darker and grittier with a hint of realism, Logan takes place in the dark future where mutants are just about extinct and the world is basically a post-apocalyptic wasteland.

The fanmade Lego trailer by YouTube account “TheBrickRanger” is a literal translation of the first Logan trailer using Lego bricks. Some substitutions were made, of course, as there are no “Sad Logan in suit” minifigs (yet), but for the most part the Lego trailer remains fairly loyal to the original.

With the success Warner Bros. has with their own Lego films, the trailer makes a strong case for Logan to also push a Lego-fied version of the film, hopefully with more pop culture references and sly humor.

The best little bits of the trailer are the added details Brick Ranger adds to the trailer, like the fake blood that looks to be made of clay. Either way, this fan trailer basically shows that the Logan trailer is great no matter what form it takes … or that Johnny Cash’s “Hurt” can make anything amazing.

More like this
Entertainment
6.15.2022 11:00 AM
15 years ago, Fox made the best Fantastic Four movie ever — it still stunk
By Jon O'Brien
Entertainment
6.22.2022 11:30 AM
Marvel’s Kevin Feige teases a fix for Phase 4’s biggest problem
By Eric Francisco
Entertainment
22 hours ago
Thor 4 interview reveals a major Guardians of the Galaxy 3 spoiler
By Alex Welch
Related Tags
Share: