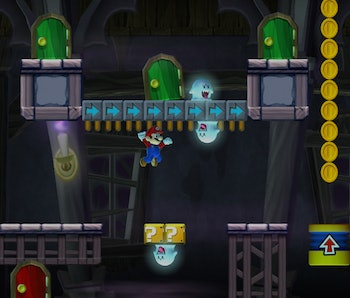 Here’s the thing about Super Mario Run: It’s fine. It’s not some kind of life-changing revelation now that Nintendo has fully, officially come to mobile phones. That’s not exactly what investors want to hear, of course, but the reality is much simpler than the fantasy. Nintendo’s going to deliver solid little chunks of classic franchises in new ways, and people are going to eat it up.

By most measures, Super Mario Run seems to have been a success. It shot to the top of the iOS charts, and social media was practically overflowing with posts about Nintendo’s latest outing. Sure, some of those were to lament the fact that the full app costs a relatively hefty $9.99, and it’s not like there aren’t criticisms to level (Toad Rally is the worst, don’t @ me), but overall? It’s a solid launch, not that investors agree or anything.

As has been reported — and is still evident if you actually go and check yourself — Nintendo took a bit of a hit after lukewarm reviews of the mobile game started trickling in. The same holds true for DeNA, the mobile game powerhouse Nintendo partnered with in order to produce titles for iOS and Android.

But Super Mario Run is only the beginning for the company. In addition to the endless runner featuring everyone’s favorite plumber, Nintendo and DeNA are already working on mobile titles based on Fire Emblem and Animal Crossing. That’s within the fiscal year of 2016 for Nintendo, according to several reports earlier this year. If still on track, that means we could be seeing two more titles from the company before the end of March 2017.

And that’s just the tip of the iceberg. There’s no telling what Fire Emblem or Animal Crossing might look like — though, say, in the style of Clash of Clans and Avengers Academy, respectively, would be excellent — but the partnership between Nintendo and DeNA looks to continue after those two. The possibilities are endless, given that the only other real Nintendo mobile attempt was Miitomo.

As previously mentioned, some fans aren’t thrilled with the price tag, and investors aren’t thrilled … in general. But that’s because investors would rather Nintendo and DeNA charge for the likes of jumping a little higher, and players in general are attuned to a much lower entry point in terms of price and then being nickeled and dimed over and over again. Dropping a dollar here and there is fine, but paying a one-time price of $10 somehow feels expensive.

But the actual game itself is full of super clever design that’s seemingly taken a number of lessons from the likes of endless runner courses made using Super Mario Maker and more. It stuffs a lot of what makes Nintendo’s games … well, Nintendo, into a bite-sized package. It feels good to just play a level through to play it, and then go back to try and get literally every coin you can.

I could nitpick and groan about the flaws the game has. Everything about the Kingdom you build is superfluous, and why you need specific houses for other characters is beyond me. Honestly, though? I come away from each time I play with a smile on my face. And that’s a good sign for things to come.