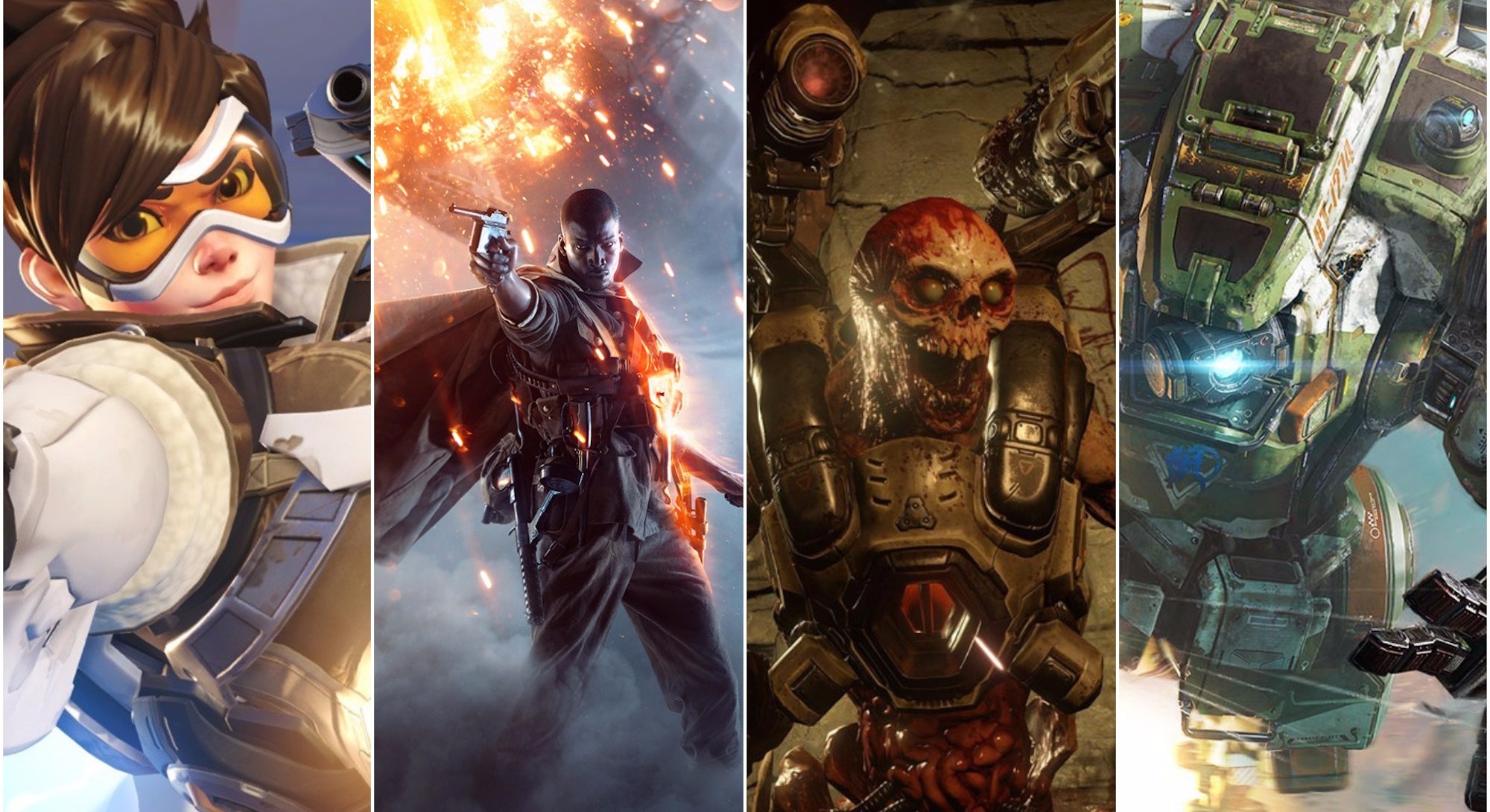 To be perfectly honest, I think most triple-A first-person shooters after the days of the first Modern Warfare and Left 4 Dead have become tired and repetitive, utilizing cheap tricks and incremental gameplay updates to convince players that they’re new each year. Hardcore players will likely vehemently disagree with me, but I’m not one and either don’t notice, or frankly, don’t really care how one Call of Duty game is different from another.

So when I sat down to write my list of best games of the year, in a year that brought me new entries in my favorite series of all time (Dark Souls) and a conclusion to another one of my favorite series of all time (Uncharted 4), I found that the best experiences I’ve had this year — the most memorable — belonged to games like Overwatch, Titanfall 2, Battlefield 1, and DOOM. In a year of stand-out games like Firewatch and The Last Guardian, it was the shooters that stood out the most, and nobody was more surprised than me.

This could all be chalked up to one big coincidence. These games don’t really have a lot in common other than sharing a perspective and core concept (first-person and guns). I loved Overwatch more for the social experience, not just in-game, but the fan culture that sprouted all around it. Battlefield 1’s campaign defied all my cynicism going into it to provide as thoughtful an experience as I can imagine for a game about World War I. DOOM wasn’t just an exercise in good design, but demonstrative of all that is unique and possible through video games, and video games alone. And Titanfall 2 squeaked into my list for surprising me by being heavier on the sci-fi than the military in a story about a soldier who teams up with a giant robot.

Of the lot, Overwatch is easily my top pick for game of the year. For Blizzard to find a way to make me fall in love with not one but 23 different characters for their own unique reasons is a feat that isn’t just hard. In a medium with a dearth of relatable, human characters, getting me to empathize with a talking gorilla seems almost impossible.

The fandom that’s erupted around the game is a huge plus, and no other game has felt so perfect for this moment of time when fandoms — for all their art, fan fictions, and cosplays — is as big as it’s ever been. Overwatch dominated video games in 2016, in my home playing with friends and outside, seeing fans all over the world embrace this diverse, zany game about military mercenaries. And the best thing about the other games on my list is that none of them are even remotely like Overwatch.

As good a year as this was for the sheer breadth of gaming experiences, the most diverse also came from the same genre. Where Overwatch went up, games like Battlefield, and the way it told several, gritty, but ultimately human, stories about World War I, went down. Where DOOM zigged and embraced tight controls to indulge in a massive geyser of blood and viscera, Titanfall 2 zagged and went the extra mile to create not only the perfect mech piloting controls, but to add enough unique features to make playing as a human soldier worthwhile as well.

In a year that often felt too immersive, these games helped provide a deeper level of escape, as well as a deeper immersion in the violence as well. Some, like Battlefield 1 and DOOM, lean into the violence, though the two treat it drastically differently. Overwatch hides its violence in the stories and characters, befitting the lore-heavy approach to storytelling adopted by Blizzard for the game, and Titanfall 2 distracts players from its military-industrial future with enough neat tricks and gadgets to fill several sci-fi TV shows.

It was a good year for shooters. The biggest games didn’t just rely on their laurels and existing audiences, but chose to pursue lofty narrative goals (Battlefield 1), diversity (Overwatch), design (DOOM), or aggressively improve on a flawed predecessor (Titanfall 2). Whether you want to shoot demon brains or fight in giant robots, 2016 has you covered, and then some.