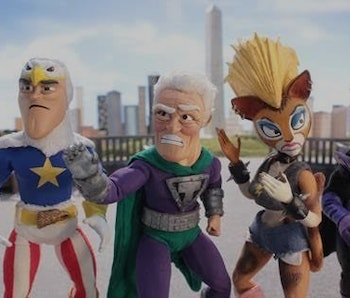 SuperMansion stars an aged hero named Titanium Rex (Bryan Cranston) who once headed the League of Freedom before succumbing to the cruel villain known as time. Now much older and grouchier, Rex heads up a new team of millennial-aged heroes who only care about themselves and social media. Confused and angered by this apparent lack of respect, things only get worse once he has to move in with them into the Super Mansion, where he will presumably get a front row seat to all things they are killing, like diamond rings and home ownership.

Originally a Crackle production from the same team that created Robot Chicken, Adult Swim picked up the airing rights to the series, and will premiere the show on their channel in January 2017.

Despite the strong cast, the material is the same kind of humor you’ll see in other Adult Swim staples like Family Guy and American Dad. It’s interesting to see Adult Swim pick up an under-the-radar Crackle series instead of another original superhero show, but perhaps the allure of the Robot Chicken name was too much to escape.

So basically, if you’re familiar with the Robot Chicken brand of humor, you’ll understand what you’re going to get with SuperMansion, which includes the same kind of “biting” race, gender, and bodily fluid jokes. For a better superhero experience, perhaps consider Justice League GO on the same network.

SuperMansion will air on Adult Swim January 1st, 2017 at midnight.

More like this
Entertainment
5.20.2022 2:30 PM
'Umbrella Academy' Season 3 release date, trailer, cast, and plot for the Netflix superhero series
By Mae Abdulbaki and Mike Bloom
Entertainment
5.18.2022 3:49 PM
Rick and Morty: The Anime could fix the show’s biggest problem
By Corey Plante
Entertainment
11 hours ago
Moon Knight writer explains why Mister Fantastic should be "a badass" in the MCU
By Eric Francisco
Related Tags
Share: