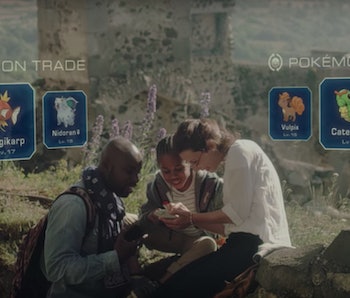 Pokémon GOhas been working to transition from a summer fad to an established pastime. Sadly, it hasn’t been too successful. The latest update on December 12 failed to deliver on many anticipated additions to the game. However, there is one thing Niantic could finally add to bring Pokémon GO to the next level: trading.

When the first Pokémon GO trailer debuted in September 2015, one of the biggest features promised was letting players trade Pokémon. This was a big deal, as trading has always been a huge part of the Pokémon community. Since then, there hasn’t been any official news on a release date for player-to-player trading, but Niantic CEO John Hanke has previously confirmed that adding trading is on the top of their priority list — mainly because of how essential it is to the Pokémon gaming experience.

Hanke did admit at the time that the company was still unclear exactly how they were going to make player trading happen. In the regular series of games, it’s easy to swap between players and set up several different trades. However, it gets a lot more complicated when dealing with mobile devices. They can have different carriers, data restrictions, and permission access, and if a connection gets lost, that could spell disaster. Plus, given the number of Pokémon people can collect, it could take forever for players to scroll through their collection trying to find acceptable trades. It could become really cumbersome if not done right.

A recent report on a code leak hints at how Pokémon GO could bring trading to the game, and it does address some of the above concerns. Instead of simply opening up a player-to-player trading platform, players would be able to put a Pokémon up on a sort-of auction block. In a special “Trade Offers” menu, players would have the opportunity to put up a certain Pokémon for trade, then others could respond with an offer. The original player would have the option to accept any one of the offers, or simply withdraw and take their Pokémon back. The biggest mystery is whether the trades would be local or international, but signs point to it being a global thing.

This type of trading would be a lot easier and quicker than direct player-to-player, but it does raise some issues. Mainly, it has the potential to create a black market of sorts. People could simply focus on collecting specific Pokémon for trading purposes rather than trying to make the most out of the game itself. There’s even the worry that people could start trading rare Pokémon for real money. There are ways Niantic could try and prevent this, but the internet’s a big place. Forums could be started solely to add money offers to trades, affecting the game’s integrity.

Still, it seems stupid to prevent Pokémon players from trading with each other over a hypothetical problem. Besides, there are so many advantages to adding player trading in Pokémon. It would enable players to expand their collection and interact with others, and it could improve marketing tie-ins. Imagine if a PokéStop inside Starbucks could also serve as an auction block, and players could go there to try and bid on different rare Pokémon that their friends are offering up. That would be amazing, and a lot of fun. Pokémon GO needs to step up its game in order to survive, and player trading could definitely make that happen.