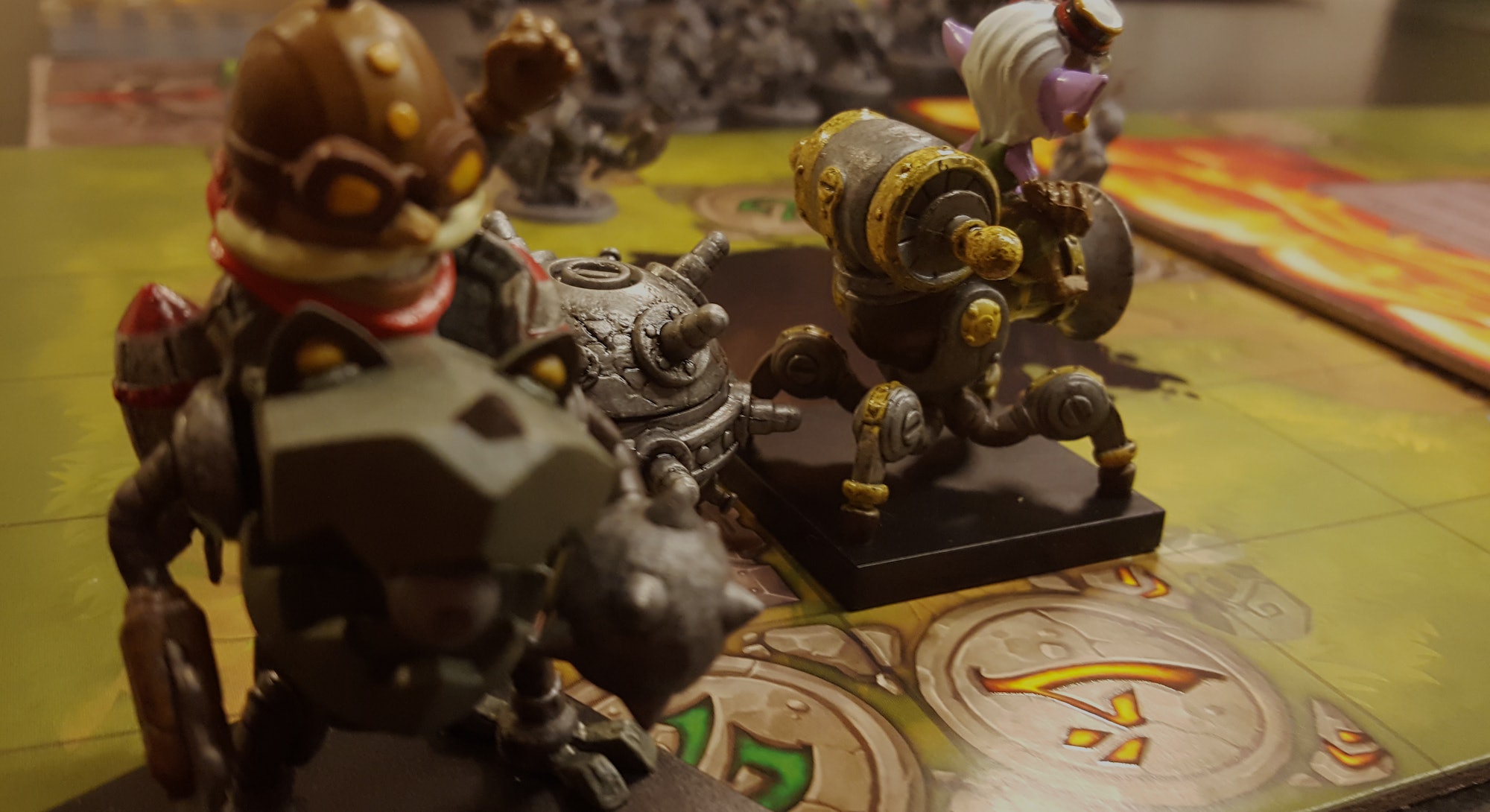 Mechs vs. Minions may not the very be best cooperative board game on the market, but there are moments in the game (set in Riot’s League of Legends universe) that number among the most fun co-op experiences I’ve had, ever. As a cartoonish paean to violence, the game embraces destruction with the verve of PlayStation classic Rachet & Clank before it, or the artillery sim Worms. We’re talking about a game that knows just how much glee you can stuff in a barrel of explosive robot fuel. Spoiler: It’s a lot.

In MvM, you and one to three other friends pilot war machines — the mechs — around a map while stomping on wee armed hoodlums — the minions — scooping up crystals, skewering enemies, pushing around a ticking bomb, or picking off minions with a laser. You’ll … kill a lot of minions. The box (which, fair warning, is so massive that finding the shelf space for it could be problematic) contains 100 of the little buggers.

It plays out over a campaign, a narrative about otter-things named Yordles exploring new ways to massacre minions. Missions are, for the most part, straightforward: Kill this, tow that object from here to there, avoid this incoming tidal wave of lava.

Perhaps the most dramatic thing about the campaign is the manner in which its difficulty whipsaws. I suspect the games sinusoidal curve may be a function of player count. Playing the campaign with two players, the missions that require players to escape a threat have given us far less trouble than those that would have the mechs sprinting off in the cardinal directions to complete objectives.

That’s not to say the swings in difficulty are necessarily bad. Halfway through the campaign, no one mission attempt has taken more than an hour or so. And given the sheer fun of stomping around in your mech, playing a mission a second or third time through has yet to be annoying.

Reduced to its most basic, MvM is a programming game. You’ll draft command cards, plunk them down in a sequence, and your robotic mech executes those actions one by one. The programming aspect is fairly light. It won’t in fact make you a good programmer; at least, I’m certainly no better at Matlab than when I started the campaign. But each turn offers a little puzzle to solve, as you mull over just the best place to slot a new command card, or scrap a card to rearrange the actions you already have on your board.

The command cards come in four elemental types: fire, electric, metal, and computery. Each card allows a mech to move, attack, or turn. Piling on cards of the same element improves that action. At first, you’ll pose all the threat of a push-mower, stuck spinning in place or resigned to picking off only the minions dumb enough to walk your way. (Broadly speaking, they’re always dumb enough to walk your way. These enemies win with numbers, not impressive tabletop A.I. — it’s zerglings all the way down.)

There’s a lovely sense of progression within each mission. After a few turns of decking out your robot with command cards, the minions start to fold like cornstalks before an industrial thresher. And the command deck contains enough variety to enable a few different types of configurations for your war machine. For much of our current campaign, I’ve preferred mobility to kill count, skewering, stomping, and speeding across the map; my partner’s mech, on the other hand, usually morphs into a rotating angel of death, like a flamethrower duct-taped to a shawarma griller.

Mechs vs. Minions is not without its few instances of frustration. A win or loss might come down to a last flop of the command deck, depending upon whether or not the right card selection is drawn. (It’s tough to complete a jigsaw puzzle without that last piece.) Minions deal damage in their own sort of command cards, which can counteract your perfectly honed program line. Sometimes that works in your favor, if a damage card like “Stuck Controls” happens to move you in the direction you needed to go anyway. At other times you’ll careen with lunatic jerks around the map, bumping a fellow mech away from an objective. The best part, though, is that no one is ever sidelined — minions can make your life more difficult, but all the players are in a mission to the very end.

The game is so fun to play that I’m already a little sad the campaign is just 10-missions long. Strangely, for a game about weaponized mechs birthed into the world of League of Legends, there’s no competitive mode. (Though I believe a Hard Mode unlocks at the end of the campaign.) Given that the map is constructed from modular tiles, and there’s so much packed in the box, it feels ripe for tinkering — I would not be surprised if fan-made missions began to surface; or perhaps Riot, as it has done with League of Legends, will unleash more hot content upon the world. I suspect it would certainly be welcome.