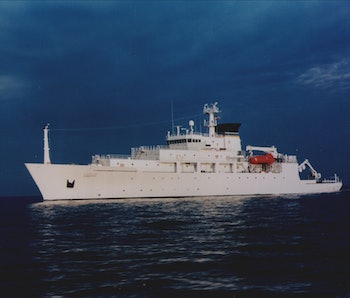 The USNS Bowditch almost certainly meant no harm — but it found trouble anyway.

On Thursday, the Bowditch ran into some trouble in the South China Sea. The Chinese Navy seized an autonomous drone-submarine that belongs to the Bowditch while the sub was puttering along in international waters.

While the Bowditch is an official U.S. Navy ship, it’s not a warship. The Navy lists the Bowditch as a Pathfinder-class survey ship, used primarily to “support worldwide oceanography programs, including performing acoustical, biological, physical and geophysical surveys,” according to the Military Sealift Command’s website. Essentially, the Bowditch makes maps. Its crew are entirely civilians as well — while the data it collects can be used for both scientific and military purposes, it’s not a combat vessel.

The seized drone is an “ocean glider,” according to the military. It’s a small, torpedo-shaped craft that glides beneath the waves collects various data. The drones are often used for weather research but have a variety of uses.

While the details of the engagement are unclear, early reports explain the event like this: The Bowditch was surveying 50 nautical miles off the Subic Bay off of the Philippines. A Chinese warship had been following the Bowditch, but the latter ship was mostly ignoring its tail. The Bowditch had deployed an unmanned, underwater vehicle, and was swinging by to pick it back up, when the Chinese warship intercepted and took the drone-sub.

“The UUV was lawfully conducting a military survey in the waters of the South China Sea,” a U.S. official told Reuters, speaking on the condition anonymity. “It’s a sovereign immune vessel, clearly marked in English not to be removed from the water — that it was U.S. property.”

The Bowditch was 500 meters away from the drone when the Chinese “stole it.” The Bowditch established “bridge-to-bridge” communication with the Chinese ship, mostly to ask if it could have its drone back, and the Chinese ship replied, “we are returning to normal operations,” before sailing away.

The Pentagon has issued a formal request for the drone’s return, which probably reads something like Pentagon spokesman Jeff Davis’s statement to the press earlier today.