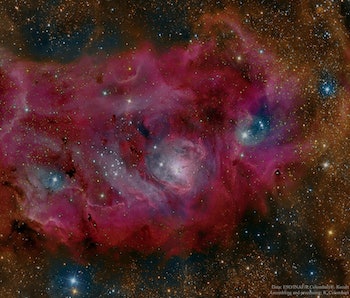 Forget Star Wars; another epic stellar saga is unfolding in a constellation not so far from Earth. Deep in the heart of the Lagoon Nebula, new stars are being forged from the gas and dust swirling around inside this brilliant nebula. An incredible image captured by the European Southern Observatory’s VLT Survey Telescope (VST) illustrates how as the fledgling stars grow, they illuminate the gas cloud, making it shine like a brilliant cosmic gem.

Officially known as Messier 8, the Lagoon Nebula is a favorite among amateur and professional astronomers, as the faint glow of this nebula can be seen with the naked eye. The light we see from the stellar powerhouse left the nebula about 5,000 light-years ago and it takes approximately 50 years for light to travel across the section of the nebula we see in this stunning VST image.

Located approximately 6,500 light-years from Earth, and nestled in the constellation Sagittarius, the photogenic nebula is harboring a cluster of hundreds of young stars within its core. These embryonic stars emit massive amounts of radiation that make the surrounding hydrogen gas glow in brilliant shades of pink, red, and orange.

Don’t let the tranquil-sounding moniker fool you. The Lagoon Nebula, named for the deep, dark furrow that cuts across the middle of the nebula, is anything but tranquil.

Dark, dusty filaments and many other complex structures, such as bright knots of gas, and clusters of stars are scattered in and around the massive nebula. The wispy filaments of gas and dust are remnants of long-dead stars that used to inhabit the region.

When the stars reached the end of their lives, they literally went out with a bang. The massive stellar explosion, known as a supernova, scattered stellar guts throughout the nebula. That material is then recycled into new stars and the stellar life cycle continues.