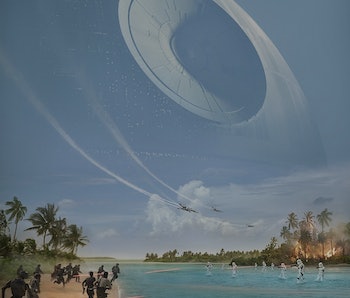 The new Star Wars movie, Rogue One, hits theaters on Friday, and everyone is understandably excited to return to a galaxy far, far away. NASA is especially pumped, it would seem, as the agency issued a release pointing out all the Star Wars-esque planets that it has already discovered.

“Some of the planets discovered around stars in our own galaxy could be very similar to arid Tatooine, watery Scarif and even frozen Hoth,” NASA’s Arielle Samuelson explains.

There are some exoplanets that remind scientists of their favorite Star Wars locations so much that they’ve named the real things after George Lucas’ creations. Kepler-16b, a Saturn-sized gas giant about 200 light-years away from Earth, is affectionately named Tatooine because it has two suns — just like Luke Skywalker’s homeworld. An ice planet with the unwieldy official name of OGLE 2005-BLG-390L is colloquially called Hoth. At about five times the size of Earth, Hoth is significantly too cold to support life, since experts estimate the surface temperature is minus 364 degrees Fahrenheit. You’d need a lot more than Tauntaun guts to stay warm.

NASA says it has also found evidence of desert planets — both hot ones like Tatooine and The Force Awakens’ Jakku, and cold ones, like Jedha from Rogue One. Jedha, NASA says, is actually a lot like Mars.

“The recurring theme of desert worlds in Star Wars is really interesting, because there is some research that shows that these would be likely habitable worlds to find,” said astrobiologist Shawn Domagal-Goldman. “The lack of water on a desert planet might be what makes it more habitable,” he continued. “Water amplifies changes to climates and can cause planets to end up being really hot like Venus, or really cold like Europa.”

Assuming there is life on them in the first place (which, NASA admits, is a big if, since our galaxy appears to be far less populated than Star Wars’s), forest planets could be even wilder than Endor or Kashyyyk. Planets like the possibly habitable Proxima Centauri b, are tidally locked, meaning one side always faces the sun.

“If you have photosynthetic organisms, they would always get fixed amounts of light all the time,” explained astrobiologist Nancy Kiang. This would likely lead to wild color variations as plants grew nearer or farther from the constant sunlight. “It would be a permanent sunset around the planet. You would see a gradation of color,” she said.

NASA says it hasn’t found evidence of ocean worlds like Attack of the Clones’ Kamino or Rogue One’s beachy Scarif. They have, however, found frozen oceans on moons like Europa, so it’s quite possible that there could be an ocean planet somewhere out there.

In the coming years, NASA will launch a number of projects meant to seek of exoplanets and, possibly, find life in the universe. However, they should probably double-check that they’re finding moons and not space stations.