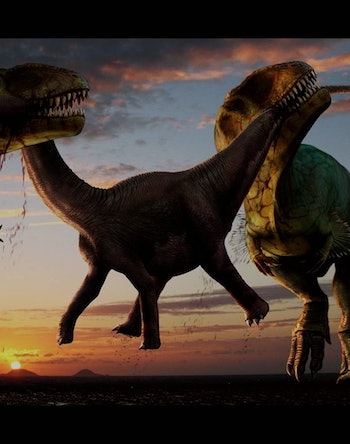 One otherwise unmemorable day, Donald Henderson, then a student of geophysics, took a different route through the stacks of his university library. He was startled by a book he’d never seen before. Not only was he startled because he’d never seen it before, he was startled because it looked unlike any book he’d ever seen. Gregory Paul’s Predatory Dinosaurs of the World was an illustrated tribute to the hectic, unpredictable lives of extinct hunters.

“I flipped it open, and here are feathered dinosaurs leaping like birds, super active — like in a cock fight,” Henderson tells Inverse. “I thought, ‘Wow, what a different way to look at dinosaurs.’ In all of my kids books, they were big heavy plodding dull gray lizard things. It was such an eye opener, to think that dinosaurs could be like that.”

Today, Henderson serves as the curator of dinosaurs at Canada’s Royal Tyrrell Museum, which boasts one of the greatest fossil collections on the planet. He’s quick to support the idea that he owes his career not only to science, but to the art that inspired him to pursue this particular science. Art allows — or, in some cases, forces — paleontologists to consider dinosaurs as animals rather than rocks. Without imagination, paleontology is the sorting of stones, which is why Henderson is authoring scientific papers that attempt to move illustrations toward the center of paleontological practice.

Consumers of mass paleoart — the movies, the shirts, the Yves Saint Laurent winter collection — tend to think of the science coming first. That’s not wrong: paleontologists dig up the bones and describe them before artists take those bones and those descriptions and create images that allow people to wrap their heads around the idea of long-dead monsters. But it can happen the other way, too, with art pushing the science further. Art is also critical.

Gregory Paul’s work may be the most famous example. Paul is widely credited with changing the way the world sees dinosaurs with illustrations that enliven the fossil record by making inferences from anatomy to create more lifelike —more scientifically accurate — animals. In the 1980s, before there was any fossil evidence to support the idea of feathered dinosaurs, Paul started drawing them on small theropods. Several lines of evidence suggested that these beasts were much more similar to modern birds than to scaly reptiles, and it therefore seemed reasonable to infer that they were more likely than not covered in feathers. Paul got ahead of scientists and, in a sense, gave them license to consider possibilities of what might be found, not only what has been.

Still, some were reluctant. At the time, some scientists dismissed Paul’s work as fanciful and ungrounded in evidence, but the fossil record caught up with informed speculation when troves of feathered dinosaurs were unearthed in China and Mongolia in the 1990s. Now, it’s common wisdom that birds actually are dinosaurs, in a very literal sense.

Henderson thinks about this chronology a lot because he is, as a scientist, inspired by art. Last year he published an article in The Anatomical Record that took as its source material a painting by Robert Nicholls called Double Death. It portrays two large theropod predators fighting over an adolescent sauropod prey, suspended in the air between them by the neck and the tail. Henderson wanted to know if this scene could really have occurred, and he worked out the physics and anatomy to prove it. It was, as far as he knows, the first time any work of paleontological research had used art as the foundation for a line of scientific questioning.

Paleontology tends to limit its source material to fossils and the ancient rocks that hold them, and not everyone’s keen on the idea of broadening that scope. Indeed, one of Henderson’s peer reviewers took issue with the choice, asserting that scientific inquiry should come from fossils and scientific investigations of them.

“I thought, ‘This is bad,’” Henderson recalls. “So I wrote a paragraph, a big paragraph justifying the use of art in paleontology in general — because it’s such a visual science, and artistic reconstructions of prehistoric animals have been around for over 200 years.”

The article, including philosophical justification, passed peer review and indeed made the cover of that journal issue. “At its core, any scientific investigation starts with the most basic question,” he says. “Why is that the way it is? Or, could it happen? It doesn’t matter where that question comes from.”

The answer Henderson came up with, as to the physics of Double Death, is that the scene could indeed have occurred if the sauropod prey, a Limaysaurus tessonei had been a little smaller. He looked at neck strength, jaw strength, and center of mass to determine whether the two Carcharodontosaurus saharicus predators would have had the strength and the balance to lift the smaller animal between them. The limit, he found, is in the neck. Each theropod would be able to lift 424 kilograms, or 935 pounds, in addition to the weight of their own head. Nicholls, who is credited as co-author of the research, produced a revised version of the piece with a smaller prey that really might have been lifted by the two hungry predators.

For Henderson, bringing these extinct creatures back to life through art isn’t secondary to the science, it’s fundamental to it. Digging up bones in order to measure them and give them names, which drives the career of many paleontologists, doesn’t thrill him as much. “They just want to describe shapes and see new shapes and give it a name and go on to the next one. I want to understand how they lived. That’s my main interest. I’m not so thrilled about giving things names — there are lots of people doing that.”

Art is the best tool paleontology has for communicating with the public and recruiting new blood into the field, as Henderson’s own history shows. But paleontologists equally need artists to expand the world of possible truths, so that we might come closer to some actual truth. The best dinosaur artists take the science very seriously, just as the most innovative scientists must have an eye for art.