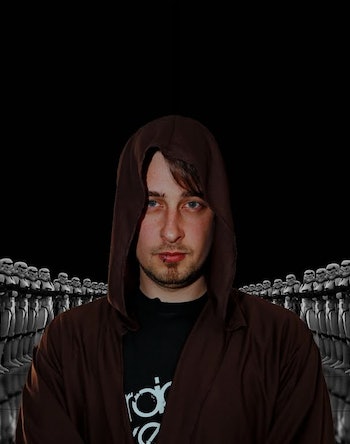 Religions change over time as evangelists and congregants react to shifting cultural norms and revelation. But what happens when the name of your faith is copyrighted property of a major media conglomerate, and its source material is subject to revision with each draft of a blockbuster movie? What happens when Kathleen Kennedy has the final say over scripture, J.J. Abrams can alter doctrine, and Bob Iger reigns supreme over all?

For unexpectedly numerous members of the burgeoning Jedi faith, these are pressing questions as Rogue One: A Star Wars Story, and each new subsequent film in the franchise, adds new elements to the canon of the fictional religion. But much like the fictional on-screen practitioners of their faith, the leaders of the Jedi religion don’t let such distractions bother them. At this point, the religion — which is now two decades old — has charted its own course.

“The church’s beliefs are an extract of that of the Jedi from the movies,” Daniel Jones, the founder of the UK’s Church of Jediism, told Inverse. “It is almost like we take the idea from the movies and expand dramatically on it.”

According to Jones, the movies are merely a touchpoint for members of his church, who subscribe to a quasi-Buddhist, holistic belief system. Their doctrine suggests that “we are part of everything, connected to each other and everything around us.” Jones says, “Once you understand that and align yourself with those principles, you will become something greater.”

Jones founded the church in 2008, but he’s just one of the surprisingly robust faith’s many leaders. The movement traces back to the mid-to-late ‘90s, and over 400,000 people in the UK wrote in Jedi as their faith during the 2001 census. Over 175,000 people still identified as adherents of the Star Wars-based religion in 2011, but for many, choosing Jedi was an act of protest against state collection of religious data. In reality, it is a smaller faction of people worldwide who actually practice some version of Jediism.

Ally Thompson is one of the leaders of Jedi Church, which seeks to organize the various factions of the faith. Those include the Force Academy, Temple of the Jedi Order, Temple of the Jedi Force, and the Institute for Jedi Realist Studies. The Jedi Church began in 1997, and Thompson joined in 2002. They all organize largely online — her church’s Facebook group has nearly 10,000 members and several years ago, they worked to construct a unified theology.

“We have evolved a far greater philosophy than even our fictional counterparts have by going back to the source material for Star Wars’s Jedi religion and philosophy: Joseph Campbell, Thompson says, referring to the revered author whose seminal work, The Hero With a Thousand Faces, helped guide George Lucass original screenplay. “Using this understanding and cross-referencing concepts in the fiction we as a community were able to develop doctrines and training which coalesce with the fiction and real world.”

The Jedi Compass, as their doctrine is known, is mostly a moral framework emphasizing virtues such as tolerance, self-awareness, duty, and selfessness. It makes little mention of the great, interconnected life force that forms the foundation of the religion on screen and in the real world, perhaps because its existence is harder to prove or harness without the benefit of visual effects. The Force, according to the Jedi Compass, is something which “all cultures agree exist, but disagree on exactly what it is,” and is largely up to the individual Jedi to define for his or herself.

That flexibility is a major key to keeping the religion viable. The first real-world Jedi followers began organizing in earnest in the late ‘90s, right before George Lucas’s prequel trilogy began hitting theaters. They had not borrowed from the 15 years worth of “Extended Universe” games and books, which further defined the Force, and they then mostly went on to ignore the prequels as well.

“We didn’t take Midi-chlorian, as this is fictional,” Jones noted. In regards to the levitation and mind-reading, this has been adapted to techniques like NLP [Neuro-linguistic programming]. “The most part is the understanding that we are all interconnected and if you harness that understanding you will beam like the sun.”

NLP, a psychological self-help program developed in the ‘70s, has largely been dismissed as pseudoscience, but scientific inaccuracies are hardly disqualifying for religious texts. It is significant, though, that the Jedi religion is more concerned with the name than the exact tenets of the faith posited by the ongoing movie saga.

In Rogue One, there are no Jedi, but a “Force-sensitive” character who seems to harness the power of the great spirit at times during combat. Few earth Jedi would suggest they have that ability — even those in the Force Academy, which study lightsaber combat.

“Because we are beyond the fiction, there is no need to attention to the films philosophically,” Thompson says. “Though many of us will, if for no other reason than to find a way to use the renewed interest to understand how to teach the Jedi Path to those inspired by the new films, this sentiment is across the entire community. The films no longer control how we move the Jedi Path forward, but are great to inspire people to live the Hero’s Journey.”