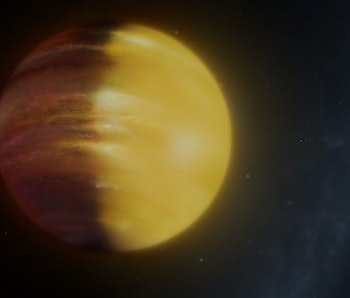 British astronomers struck gold (well, rubies and sapphires, technically), when they discovered that a gas giant more than 1,000 light-years away from Earth is being ravaged by massive storms that are likely made of corundum — the same stuff the two precious gems are made out of.

The planet, HAT-P-7b, is 16 times larger than Earth, and researchers at the University of Warwick determined that it’s most likely affected by massive weather changes by monitoring the shifts in light that gets reflected from the planet’s atmosphere. They found that HAT-P-7b has an equatorial jet with “dramatically variable wind speeds,” and at its fastest, these winds surge around the planet, creating devastating storms.

Those storms, though, are probably beautiful, since they’re made of the gem dust. Nobody would be able to observe them and live, though, since HAT-P-7b is a tidally locked planet that doesn’t spin, meaning one side is always facing its star. Researchers say the hot side of the planet would be nearly 4,700 degrees Fahrenheit.

“We expect clouds to form on the cold night side of the planet, but they would evaporate quickly on the hot dayside,” explained Dr. David Armstrong, a member of Warwick’s Astrophysics Group.

“These results show that strong winds circle the planet, transporting clouds from the night side to the day side,” he continued. “The winds change speed dramatically, leading to huge cloud formations building up then dying away.”

The discovery marks the first time that scientists have observed weather on a gas giant outside of the solar system. Sure, we have Jupiter’s Great Red Spot in our own neighborhood, but as impressive as it is, that storm isn’t made of bling. HAT-P-7b might be the winner here.