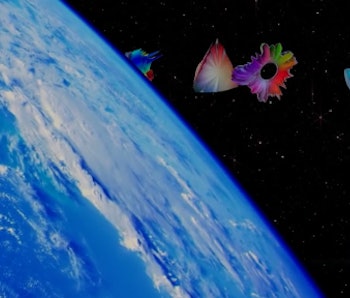 Listen up space nerds. If you’ve ever dreamed about sending a part of yourself into the cosmos, we have the perfect contest for you. Israeli artist and computer programmer, Eyal Gever, is teaming up with Made in Space to 3D print a sculpture of laughter and then launch it into space.

Made In Space — a 3D manufacturing company — currently have a 3D printer operating on the space station, printing out replacement tools for the astronauts on board. While the first 3D printer launched in 2014, Made in Space struck a deal that would give Gever — who is known for blending tech and art into wild and wacky 3D sculptures — the opportunity to be the first artist to create a sculpture in outer space.

The human voice is powerful and capable of showcasing an individual’s mood, personality, and opinion. But that’s not all — it can soon be turned into a work of art thanks to a collaborative project, called #Laugh.

In describing the project online, Gever said he was inspired by cave paintings, heralding them as a way of documenting and celebrating humanity’s presence. “#Laugh will be the 21st Century version of that a mathematically accurate encapsulation of human laughter, simply floating through space, waiting to be discovered,” he said on the project’s website.

The project runs on an app, which unfortunately is only available through iTunes. (Sorry Android folks). Additionally, the program only works on iPhones, iPads, and iPod Touch devices that have iOS 7.0 or later. Via the app, people across the globe can create a virtual representation of their laugh, which will be shaped like a star.

Why laughter? Gever was tasked with selecting a work of art that transcended borders. Following the suggestion of a friend, Gever is now crowdsourcing laughter submissions through the app. The audio submission with the most likes will be turned into a printable file, that will then be sent to the space station.

The contest officially opened on December 1, and participants can submit their laughs until midnight on December 31. The winner will be announced in January and the bizarre sculpture is set to be printed and released in February.

More like this
Science
8.12.2022 10:00 AM
45 years ago, the first Space Shuttle made history without going to space
By Allie Hutchison
Science
8.3.2022 8:56 PM
NASA confirms Artemis I launch date and previews upcoming milestones
By Kiona Smith
Science
8.1.2022 9:15 PM
Long March 5B: Another Chinese rocket makes an uncontrollable entry to Earth
By Jennifer Walter
Related Tags
Share: