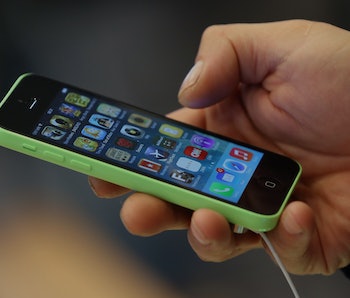 We rely on our cell phones to get through the day. These handheld mini-computers keep us connected, but they also keep us tethered. While portable battery packs are helping us charge our devices, they can be expensive and bulky. But what if there was a better option? Researchers at Michigan State University have developed a new way to charge your phone, that harvests energy while you’re using it.

Researchers from Michigan State University created technology that draws power from human motion. The film-like device, is called a biocompatible ferroelectret nanogenerator (FENG), and could be a new way to harvest energy. The new, low-cost device can even be folded to generate more power.

Sounds to good to be true, right? Engineers say they recently proved it works. They were able to operate three different devices — an LCD touchscreen, a bank of 20 LED lights, and a flexible keyboard — all without batteries.

“We’re on the path toward wearable devices powered by human motion,” Nelson Sepulveda, associate professor of electrical and computer engineering and lead investigator of the project, said in a statement. “What I foresee, relatively soon, is the capability of not having to charge your cell phone for an entire week, for example, because that energy will be produced by your movement.”

The study has been published in the journal Nano Energy, which is available online.

So how does it work? The remarkable new device is fashioned from silicone wafers, which are composed of different layers of environmentally friendly substances including silver, polyimide and polypropylene ferroelectret.

Engineers then added ions so each layer in the device contains charged particles that generates electrical energy when the compressed by human motion or mechanical energy.

The FENG may be as thin as a piece of paper, but the technology is scalable, a feature that will allow the nanogenerator to be used in many different devices. For instance, when the engineers used the FENG to power the LED lights, they used a palm-sized device, and the device used to power the touchscreen was about as small as a finger.

The FENG is also lightweight, flexible, and environmentally friendly. Its developers are hoping that such a low-cost, yet robust device could be a promising new way to harvest mechanical energy, changing the way we charge electronics such as wireless headsets, cell phones, and other items.

Sepulveda explained that if you wanted to increase the amount of energy collected, all you have to do is fold the device. “Each time you fold it you are increasing exponentially the amount of voltage,” he said. “You can start with a large device, but when you fold it once, and again, and again, its now much smaller and has more energy.”

The next step for Sepulveda and his team will be to take their idea to the next level. The group wants to develop technology that would take the energy collected by the FENG and transmit it to another device.

So the next time you see a friend or co-worker constantly on the phone, don’t give them too much grief. They may not be playing Pokemon Go or looking for dates on Tinder, they may just be charging their phones.