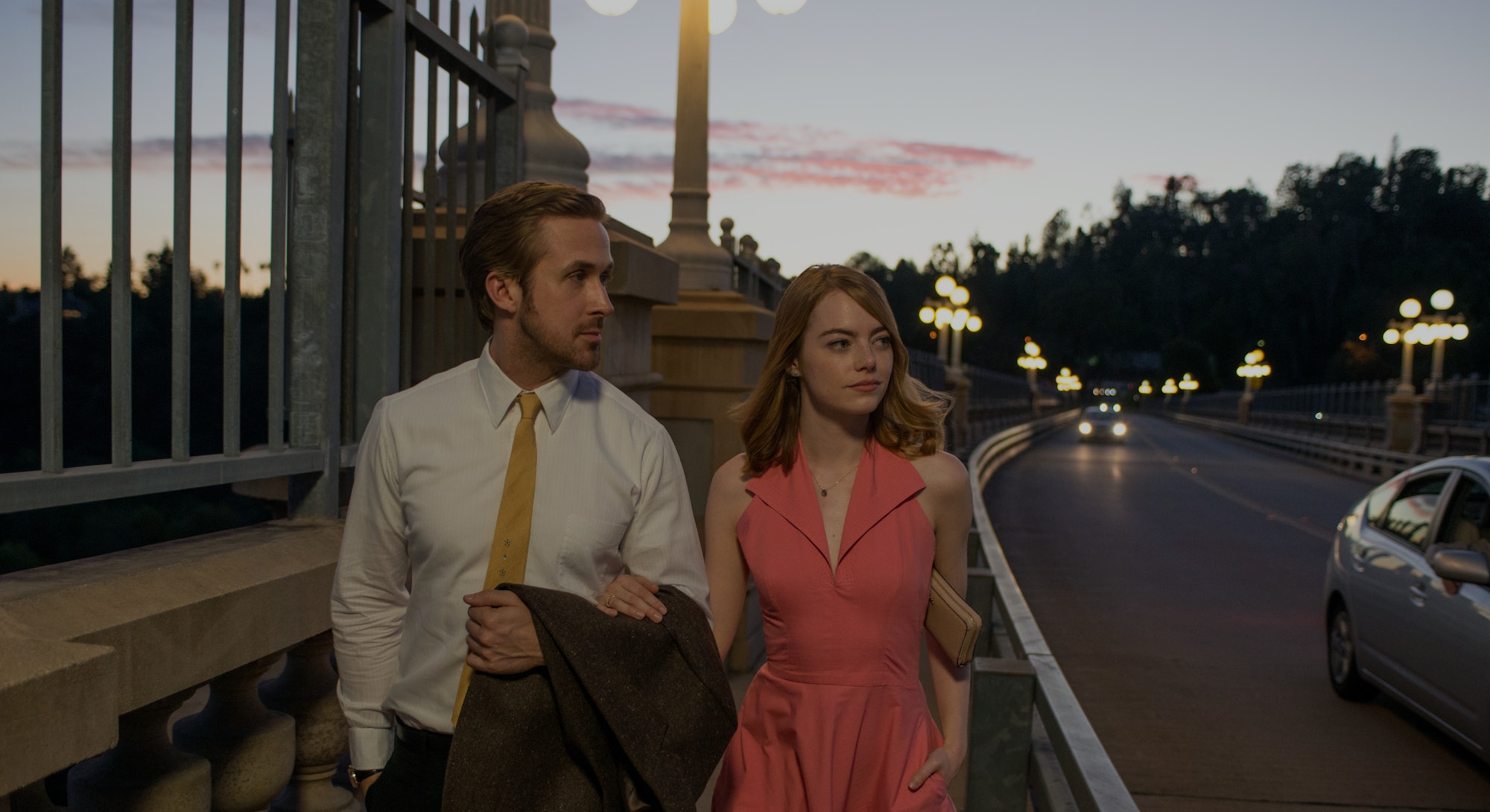 When Damien Chazelle’s music school masochism drama Whiplash finished its fairytale run from Sundance to the 2015 Oscars, the filmmaker was 30 years old and able to write his own ticket. For many in his shoes, that would have meant making the once-unlikely leap from indie wunderkind directly to blockbuster filmmaker (see: Colin Trevorrow, Marc Webb, Gareth Edwards). But Chazelle had a more ambitious and unique plan: Instead of joining the march toward the CGI-rendered future, he wanted to reach back and revive the big screen musical. That he also wanted to do it in a real-world setting made it an even more impossible task.

“I knew exactly what I wanted to do after Sundance,” Chazelle told Inverse. “I wasn’t even looking at any offers coming in…. I was just focused on putting any tiny shred of capital that I had thanks to Whiplash directly into La La Land. There was never a question there.”

Chazelle, a musician and nostalgist who grew up loving jazz and post-war movie musicals, had been working on the script for La La Land since 2010. As with both Whiplash and his debut feature, 2009’s Guy and Madeline on a Park Bench, the story focuses on a jazz-obsessed young man desperately clinging to his artistic integrity while still trying to function in the real commercial world. As Sebastian, Ryan Gosling rails against modern pop culture and tapas restaurants opposite Emma Stone, who plays Mia as a struggling actress enraptured by the idea of classic Hollywood. But where Whiplash was a small-scope cacophony of pain and sacrifice, La La Land offers, at least at times, a lighter and more relatable story.

Gosling and Stone dance, sing, and make one another swoon and shout. In a sense, they play the modern versions of Gene Kelly and Debbie Reynolds, with a splash of Humphrey Bogart and Lauren Bacall for their heated back-and-forth.

Chazelle’s script was a highwire act, as he sought to marry “full-fledged heightened old aesthetic of the MGM musicals of the fifties,” embodied by films like Singing in the Rain, and a contemporary, realistic, grounded story, set in modern day in a modern day city.” La La Land begins with a soaring opening number that turns a scorching, backed-up L.A. freeway into a massive, joyous stage, and later hits some of the city’s most iconic locales, often lit by the neon sunset or starry night sky.

In so many ways, the movie romanticizes Los Angeles and the allure of show business, and then pulls back the curtain on a city that is built on rejection; like the town and its promises, the film lifts your spirits and then punches you in the gut. Chazelle pulled off what seemed like the impossible, and the film is now a leading contender in this year’s Oscar race.

Chazelle spoke with Inverse about the long road to La La Land, the intense shoot, and the message embedded in all those songs.

Let’s start with the opening scene, the huge musical number on the freeway. How’d you pull that off, logistically? There are 100 dancers, just as many cars, and some big wide shots. Did you use helicopters? Special camera rigs?

There were no helicopters. We mapped that out as we did most of the movie, as a one-camera shoot. We just wanted it to feel like a single take, so it’s three shots stitched together to look like one shot. We rehearsed that a ton. It was pre-vized and storyboarded and everything. And then we got on this freeway ramp that we shut down for a weekend and shot it. I think what made it possible at the end of the day was that it’s just this one elevated ramp. It’s an easy pass ramp [connecting the 110 and 105 freeways].

There’s not that much of the movie that’s visual effects, aside from Ryan and Emma floating up into space at the planetarium at Griffith Observatory. Here and there there’s things that we would paint out in a scene. Or a few cars here and there that we would add on horizon, in the opening number. Things like that. There was never a situation, except with the outer space stuff, there was never a sequence that was kind of built through visual effects. It was always shot practically, and then we tried to use visual effects as scarcely and as invisibly as possible.

Was there a more difficult scene to shoot?

In some ways, Ryan and Emma’s hilltop dance [overlooking L.A.] was the most difficult. We wanted to shoot that practically. We did it at real magic hour, which means we only had a half hour window to shoot it. That’s a six-minute unbroken shot that involved singing, dancing, really complicated camera movement. All of that had to be sort of intricately choreographed, pre-designed, and planned. And yet feel completely effortless and spontaneous, and sort of charming, and almost easy on screen. There was a lot of stress behind the camera, and yet if you felt that stress in front of the camera, the scene would never work.

That was a tough one to pull off, but we wound up getting two nights to shoot it. It’s about five takes each night. We wound up using the third take, I think, of the second night. I was thrilled with what Ryan, Emma, Mandy Moore our choreographer, and DP Linus Sandgren and his team — his camera operators, who are kind of the dancers you don’t see — what they were able to do.

It can’t be easy to edit a film that is so precise with so much dancing, because you can’t really fudge anything or patch in footage. How much coverage did you need and how many cameras did you use?

We shot about 40 days. We shot with one camera for most of it, and then we’d have a second camera sometimes doing second unit stuff, grabbing pillow shots of L.A. We were never shooting coverage or B-cam footage or anything like that. All the dancing was just all one single take. We did many takes of it, but just one camera approach. Like the old days. (Editor’s note: This is crazy.)

You began developing this film in 2010, and the success of Whiplash made it happen, and got you a bigger budget, around $20 million. Did the scope of the movie change, get bigger?

I first wrote the script, and the producers first positioned it as a low budget kind of $1 million or under movie. That we would do it kind of very scrappy, and yet it still began with a hundred dancers on a freeway … every sub-piece in the movie. It was pretty much what you see on the screen. The scope actually never changed. It was just the reality of actually getting it made, and getting that scope put on the screen took a lot longer. I’d say the movie obviously changed, but it never fully changed shape or structure or style.

This film is nostalgic for Hollywood, especially in the first half, but the fantasy that creates sort of falls apart in the second half. It felt like, even as a musical, a warning about the danger of nostalgia — which drives so much of the business now — run amok.

I think nostalgia is both helpful and holds people back. I wanted to question it a little bit in this movie, question the limits of nostalgia. Obviously this is a movie that in many ways is deeply nostalgic for certain ideas of movies. Certain ideas of love on screen. Certain idea of musicals. And a certain idea of L.A. But it’s also … again, going back to John Legend’s speech in the movie: If you get too resolutely mired in the past, you don’t move forward. That applies to art. It applies to life. I think it applies to everything. My hope is for this movie not to be truly nostalgic, but actually to take stuff from the past and make it new.

Is that personal for you?

I’d always dealt with that a little bit. I grew up loving jazz, and knew that there’s some aspects of what I’m doing as a young person that are anachronistic. And then I’m here trying to make a musical in the sort of MGM-style that’s considered kind of old fashioned by a lot of people. And then of course within the story, yes it is also these sort of people who in many cases their artistic ideals are from different eras. This idea of just getting out of time is sort of how I felt sometimes. I think it’s how the characters feel in the movie.

If the characters are in the wrong era, their connections sort of miss, in the sense that they’re like ships passing in the night. Their timing is a little off. Those kind of logistics getting in the way of ideals and principles and abstract kind of notions of purity and artistry and love and beauty and all that stuff is … The abstract, having to meet head first with reality and the mundane.

If you hold out a long time for your dream, work shitty jobs until you find real success, people see you as an inspiration. But if you don’t get that success, you’re seen as delusional. It’s all hindsight, which is hard when you’re in the moment.

It’s ideals versus practicalities. And so, that’s why Ryan’s character’s decision in the movie to kind of try this new musical path [after being such a jazz purist] is imminently understandable. And yet at the same time, I feel like his stubbornness in the first half of the movie, not doing anything like that [new music], I empathized with that as well. It’s a debate I’ve had in my own head.

But I also wanted to make sure that it wasn’t just a case Sebastian saying, “Okay, I’m going to sell out and go in for the money.” There’s even kind of a philosophical reason that he opens himself up to it, the reason voiced by John Legend’s character, Keith: If a music, or any art form, doesn’t keep moving forward, it dies.

La La Land opens in New York and Los Angeles on Friday, and nationwide in one week.