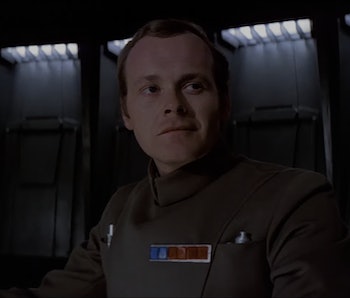 The most boring scene in A New Hope might be one of the most important scenes for its prequel 40 years later, Star Wars: Rogue One.

In a rather staid part of George Lucas’s otherwise exciting original 1977 film, a handful of Imperial senators and generals — including Grand Moff Tarkin and Darth Vader — sit around a starkly lit black conference table bickering about the Empire’s newest superweapon, the Death Star. It’s an easy scene to forget since Lucas’s dynamic visual style is much more memorable than any of the dialogue, save for the lines that became iconic. Also, as a kid watching Star Wars, all you really want is to see Luke Skywalker go on his adventure of self-discovery, not a room of bad guys talking bureaucracy to each other.

But what at the time seemed like a meaningless stop-gap sequence now takes on a whole new dimension, given the standalone prequel/sequel’s position in the broader spectrum of the ever-changing chronology of the beloved film saga. The Imperial back-and-forth not only sheds light on the state of the Empire after Jyn Erso and her band of misfit Rebels steal the plans to the Death Star, but it recontextualizes what we can expect the superweapon to do in the new film.

From the opening lines we’re fed relevant information about the fallout from what will be the events in Rogue One: “Until this battle station is fully operational we are vulnerable,” says an Imperial Commander named Cassio Tagge. “The Rebel Alliance is too well equipped. They’re more dangerous than you realize.” Admiral Motti responds, “Dangerous to your starfleet, Commander, not to this battle station!”

Only the biggest Star Wars nerds know that Tagge was chief of military operations for the Death Star. And given Motti’s comeback, it would be safe to say that Tagge has had some kind of recent significant run-in with the Rebels and came out on the losing end. Considering that Rogue One positions the movie directly before the events of A New Hope, it’s possible that the Rogue One filmmakers did a bit of retconning, making it so that Tagge is referring to the two-pronged Rebel attack that allowed Jyn to steal the Death Star plans on Scarif.

The losing starfleet Motti is referring to could also refer to the space battle against the so-called Shield Gate, which Rebel X-wing squadrons will presumably destroy so that Jyn and the other Rebel ground troops can attack the Imperial base there.

As if we didn’t know already, Tagge reiterates that the Rebels do steal the plans as a way to gain a tactical advantage over the much more powerful Empire. But one question remains: Do they have all the plans?

Tagge says, “If the Rebels have obtained a complete technical reading of this station, it is possible, however unlikely, they might find a weakness and exploit it.” Luke eventually does find that weakness, but it doesn’t seem to matter to Vader in that moment. He actively tried to intercept the plans on Leia’s Tantive IV and failed, but still tells the room, “The plans you refer to will soon be back in our hands.”

But the other more important point of contention is the fact that Tagge mentions the Death Star isn’t fully operational despite Motti’s insistence that the Empire has the upper hand.

“This station is now the ultimate power in the universe; I suggest we use it,” Motti says, while Tarkin interjects a bit later, saying, “Lord Vader will provide us with the location of the Rebel fortress by the time this station is operational. We will then crush the Rebellion with one swift stroke.”

We know that Ben Mendelsohn’s Director Orson Krennic (who you’d imagine would probably be at this meeting within the timeline of the movie) conscripts Jyn’s scientist father Galen into the Imperial army because his research is the key to unlocking the Death Star’s full firepower. We also know that Krennic decides to test the diminished power of the Death Star laser on Jedha.

It’s clear, given Motti and Tarkin’s words, that the Death Star doesn’t have the ability to blow up entire planets even into the events of A New Hope. It’s only later in the movie when an Imperial officer quite conveniently tells Tarkin, “The final checkout is complete. All systems are operational,” that they’ve somehow managed to get the moon-sized battle station to full power before blowing up Leia’s home planet of Alderaan. Perhaps Krennic failed and died, and Tarkin is brought in to fix his deadly mistake.

The scene is a fascinating look into how the currently standalone movies will mine previously innocuous scenes for potential plot points. The inspiration for Rogue One might have come from the opening crawl in A New Hope, and ripples of the original films will definitely be felt in other places, too.