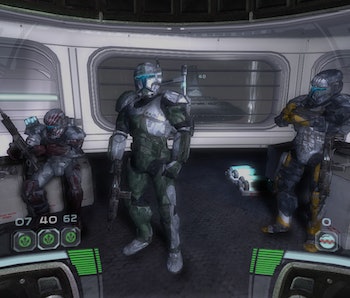 The Star Wars universe has been a part of the gaming industry ever since Star Wars: The Empire Strikes Back released on the Atari 2600 in 1982, with tons of video games for fans to enjoy released over the last 30 years. While it’s true that every title may not have lived up to their utmost potential, there are many that truly invited players to become members of the vast universe introduced in the movies, ones which are still worth playing today while we wait for the upcoming release of Rogue One.

(It’s worth noting that many of these titles have been remastered or rereleased on current generation consoles and PC.)

The sequel to LucasArts’s original pod-racing game, Star Wars Episode I: Racer, Star Wars: Racer Revenge refined the classic racing genre into a near-perfect pod-racing experience for anyone who owned a PlayStation 2. The mechanics were relatively straightforward and easy to handle, but boy did they deliver with unlockable tracks, time trials, and hidden racers to discover.

One of the more modern Star Wars releases, Star Wars: The Force Unleashed was a game built to truly display the power of the Force through the eyes of Darth Vader’s secret apprentice, Starkiller. Trained to hunt down and destroy Jedi for his master, players take on the role of Starkiller to unleash devastating attacks and thwart their master’s plans — learning a thing or two about the origin of the Rebel Alliance and Galactic Civil War in the process.

Released on the PlayStation 2 over a decade ago, Star Wars: Bounty Hunter worked to fill gaps in Jango Fett’s personal story before he was introduced in Star Wars: Episode II – Attack of the Clones. In the game, you take on the role of Jango Fett himself as he hunts down Komari Vosa for Darth Tyranus, learning about his history and why he was chosen as the base template for the entire clone army the Republic was building in Episode II.

The first of three games in the Rogue Squadron series, Star Wars: Rogue Squadron was originally released on the Nintendo 64 and allowed players to jump into the cockpit as Luke Skywalker. Instead of opting to go the route of a flight simulator, Rogue Squadron was designed as an arcade-like action game too — which made it much more accessible and entertaining for players who just wanted to hop into an X-wing.

Using the Unreal Engine developed by Epic Games, LucasArts’s Star Wars: Republic Commando was a rare addition to the Star Wars video game library that brought players into the world of combat on the ground without a lightsaber. More importantly though, it followed the story of an elite group of clone commandos known as Delta Squad — who had a surprisingly good story about the conflicts between Attack of the Clones and Revenge of the Sith.

Originally released in 2004, Star Wars: Battlefront was one of the first Star Wars video games to successfully capture the thrill of participating in gigantic battles from the movies. Players could control solders from both the original trilogy and the prequels, fighting across famous battlefields and taking part in a sporadic but memorable campaign — complete with many famous heroes from the franchise.

Just like the original Star Wars: Battlefront, Battlefront II worked to bring famous Star Wars battles from the big screen to your gaming platform of choice. This time around the development team at Pandemic Studios added a vastly improved single-player campaign focused on the 501st Legion while introducing a bunch of new gameplay mechanics, such as space battles for example, that brought the already excellent gameplay formula to new heights.

Star Wars: Knights of the Old Republic may be a little rough around the edges when it comes to performance, but dated graphics and Dungeons & Dragons-like combat mechanics don’t take away the excellent narrative that makes it one of the best role-playing games out there. Developed by BioWare — the folks also behind Dragon Age and Mass Effect — KoTOR had decisions that carried weight, seriously influencing your character’s path into the Light or Dark side of the Force. To this day, it remains one of the best story-driven Star Wars experiences in gaming.

More like this
Gaming
Jan. 30, 2023
Here’s Exactly How Long it Takes to Beat Hi-Fi Rush
By Hayes Madsen
Gaming
Jan. 26, 2023
9 must-play games coming to Xbox Game Pass in January and February
By Robin Bea
Gaming
Jan. 23, 2023
Everyone your main character can romance in Persona 4 Golden
By Hayes Madsen
LEARN SOMETHING NEW EVERY DAY.
Related Tags
Share: