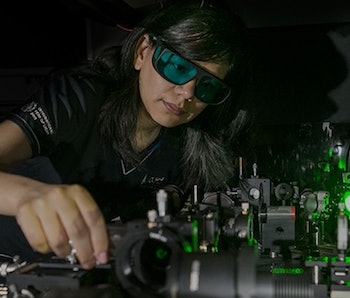 Night-vision goggles look ridiculous. They’re clunky, heavy, and never really sleek TV make them look. What if there was a way to let people see in the dark without having to wear that ridiculous equipment? Seemingly, all it takes is a film of nano crystals affixed to an otherwise ordinary pair of eyeglasses, the Australian National University announced Wednesday.

Those nano crystals are 500 times smaller than a human hair. They were built on glass to allow light to pass through them — opaque glasses wouldn’t be very useful — which wasn’t easy to do.

“This is the first time anyone has been able to achieve this feat,” ANU PhD student Maria del Rocio Camacho-Morales explained, “Because growing a nano semi-conductor on a transparent material is very difficult.”

The research is published in the journal Nano Letters and is being presented at the Australian Institute of Physics Congress in Brisbane this week.

Humans see light in what we call the visible spectrum. Our eyes pick up reflections of light that we interpret as red, orange, yellow, and so on. The nano crystals can be used to convert light in the infrared spectrum, which is just beyond our physical limitations, to something our eyes can register. The result: the ability to see in the dark and, in some cases, some of the radiation given off by electronic devices and the sun.

The researchers said these nano crystals might also serve other functions. They could be used in anti-counterfeit devices by financial institutions, for example, or in hologram systems. The night vision glasses are still the most interesting use of this tech, mostly because soldiers and police often have to be able to see in the dark, but also because many people want to see beyond the human eye’s limits.

Just look at Cable, the anti-hero making his big screen debut with Deadpool 2, who is able to see things on the infrared spectrum. That seems cool! At Washington University’s School of Medicine in St. Louis, researchers found a way to make that superpower a reality in 2014, and others have tried to see in the infrared range too, but the only really noticeable difference is slightly better night vision.

That’s not a lot of reward for shooting two 1,000 nanometer infrared photons at somebody’s eyeballs. ANU’s tech, on the other hand, reportedly “turns darkness into visible light” and would make seeing in the dark as easy as putting on a pair of glasses. (Which should be familiar to the 285 million people visually impaired people in the world.)

Compare that to strapping something like this to your face:

ANU researchers said they want to have a prototype of their night vision glasses developed by 2021. They’re also said to be working with DARPA, the U.S. military’s research agency, on studying the technology.