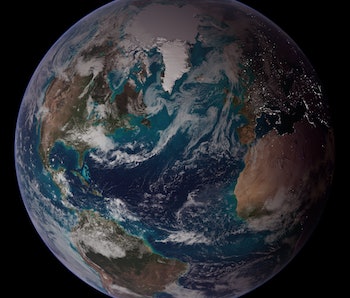 NASA has made a big step in the fight against climate change, with a plan to launch satellites into space and measure atmospheric gasses over the Americas. The $166 million Geostationary Carbon Cycle Observatory (GeoCARB) mission will span five years, and its leaders are confident that it will improve humanity’s understanding of natural sciences.

The move comes at a time when scientists are fearful that not enough is being done to reduce carbon emissions. The Paris Agreement, which promises to limit global temperature rise to less than two degrees Celsius, is now under threat after the election of Donald Trump to the U.S. presidency. Trump pledged in May to back out of the Paris climate deal, and a reported shortlist of EPA candidates suggests he intends to roll back climate commitments. Long-term science missions like GeoCARB will be vital in maintaining momentum in the emissions reduction fight.

The University of Oklahoma-led team will launch a commercial communications satellite that will take daily measurements of carbon dioxide, methane, and carbon monoxide, with a precision as fine as three to six miles, from an orbit of around 22,000 miles above the equator. If successful, GeoCARB has the potential to strengthen NASA’s ties with the private sector, demonstrating that NASA can work with commercial satellites to complete missions.

It’s not the only Earth science initiative NASA is undertaking. On Monday, the agency will launch the Cyclone Global Navigation Satellite System (CYGNSS), which will help scientists better understand hurricane movements and how they intensify.