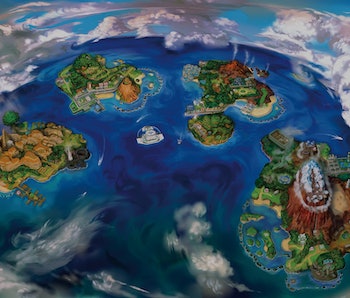 With Pokémon Sun and Moon, the massively successful series has adopted enough modern video game conventions to be called a true JRPG. But part and parcel with that, the franchise game’s simple premise of obsessive collecting and aggressive exploration has opened itself up to more ambitious storytelling while turning away from the comforting streamlined design that aged fans have come to expect with each new iteration.

Each new Pokémon game brings with it a host of new gameplay refinements and additions. Those additions build on each other game-after-game, and range from small things like the ability to run, to a full suite of social and care mechanics for your Pokémon. These new gameplay mechanics, typically explained to players through dialogue with random NPCs, is about the extent of the game’s prologue. And aside from a fourth wall-breaking introduction in which players are asked for their name (later gender) and the name of their rival, the adventure begins with relatively little resistance.

Jokes were had at the absurdity of letting one’s young child venture forth into the world, armed with nothing more than a backpack, one starter Pokémon, and some pocket change. But the truth of the matter is that the Pokémon games have remained as one of the most unhampered RPGs in video game history, often choosing to focus more on the thrill of adventure, the excitement of encountering and capturing new Pokémon, and defeating new gym leaders.

Sun and Moon changes that, but not so much to be a completely different game. Cinematic cutscenes introduce the player to a brand new region known as Alola. Rivals and companions continuously make reoccurring appearances, beyond the requisite rival battles interspersed throughout the game. While the Pokémon games have always utilized the turn-based combat of JRPGs, Sun and Moon feels like the first to also adopt something like Final Fantasy’s exhaustive narrative construction, though on a significantly smaller scale.

This is not a lamentation of the game’s sudden bulk, especially since this has been an evolution long-coming.

The Pokémon video games are one of the biggest franchises in the world for a set of games that feel relatively unchanged throughout the years. With each new Pokémon game, the graphics improve, the gameplay gets a few new additions, and as always, more Pokémon are added. But the core mechanics remain unchanged, and this simplicity meant that the games could also get away with an almost Dark Souls-style of encounter-based storytelling where the world is built through dialogue and detail. That ended in 2016 with Pokémon Sun and Moon, where the games fully embrace the active storytelling of more traditional JRPGs, resembling the animated show that spun-off from the game.

This is partially the reason why the franchise as a whole has felt fractured in some cases. The animated cartoon, which began the television adventures of Ash and his rotating stable of travel companions, have felt like the franchise’s most commercial arm, growing alongside the video games. The same goes for the product and merchandise branches which aggressively pushed the electric rodent mascot Pikachu into one of the world’s most popular characters.

The video games however, have felt relatively aloof, maintaining a strict dedication to the core franchise’s almost austere game mechanics, which when parsed are in fact very complicated. However, the beauty of Pokémon’s gameplay is that it can be as simple as the player needs them to be, and ultimately the three concepts of collecting, fighting, and evolving were often more important than any story Game Freak packed into each new entry.

The story often follows a specific mold where the player goes off on a journey, fights his rival every now and then, stops an evil plot from each entry’s unique criminal organization, and ultimately defeats the Elite Four to become the new champion of that game’s region. Sun and Moon doesn’t deviate too much, but the duo adds just enough to make the game’s opening hour feel almost too bloated, especially compared to previous games. In addition, various other characters around the Alolan islands, including the player’s mom, are given anime-esque personalities that go above and beyond the former one-line dialogues characters often delivered upon introduction and defeat. The cast of characters in Sun and Moon also just feels larger than any Pokémon game previously.

It’s interesting to view this new narrative-heavy direction for the core Pokémon games in light of the rest of the machine. With Nintendo games, it’s often unpredictable in how the company chooses to focus its efforts. The fact that Sun and Moon feels more like an episode of the cartoon, rather than the other way around is a little jarring, but ultimately expected. At this point, the only discernible connection Sun and *Moon have to the first generation is the fact that both are on Nintendo’s handheld console. And who knows how long that will still be the case.