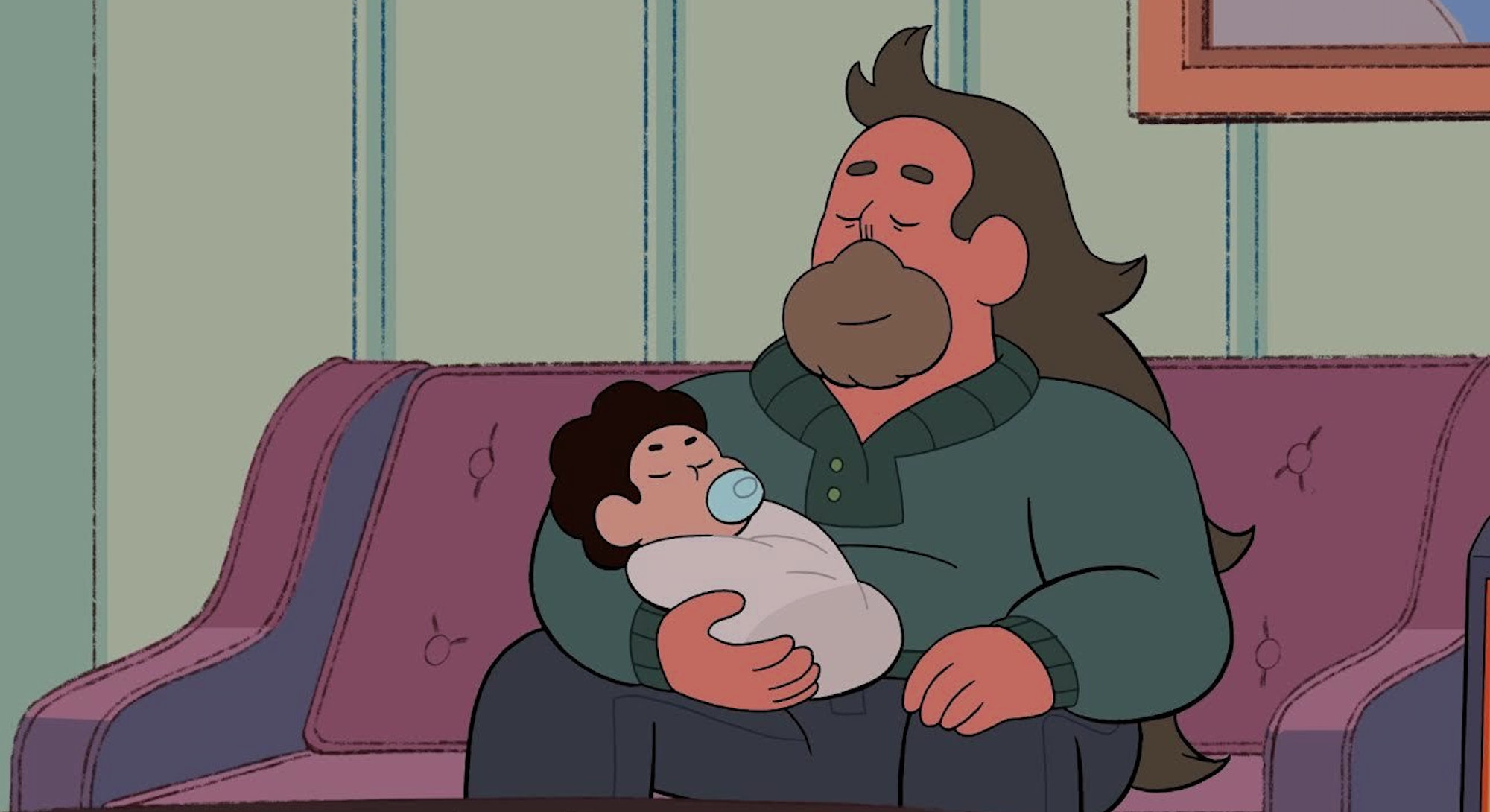 Every Steven Universe fan has shed tears over the show’s heartbreaking and often cathartic musical numbers. Rebecca Sugar has a knack for using music to help her audience process difficult emotions, like guilt (“Here Comes a Thought”), jealousy (“It’s Over Isn’t It”), and worthlessness (“Do It For Her”) without judgement, allowing fans to accept their own faults and grow with the characters. The final episode of 2016, “Three Gems And A Baby”, features another standout song called “I Could Never Be (Ready)” in which Steven’s father, Greg Universe (Tom Scharpling) tries to grapple with raising a newborn immediately after losing his partner, Rose Quartz.

Inverse caught up with Sugar to discuss how she uses music as a storytelling device, her songwriting process, and the challenges of creating music for the show.

Where did the idea for “I Could Never Be (Ready)” in “Three Gems and Baby” come from?

“I Could Never Be (Ready)” came in part because I was asking a friend about his baby daughter and wondering how he knew he’d be ready to have a baby. He told me you can never be ready and that that’s something a lot of people say, but it’s really true. That’s half the reason I wrote the song, but the other half is a secret I’ll only tell when the show is over.

“I Could Never Be (Ready)” deals with fear of change, and the loss of Steven’s mother, Rose Quartz, hangs over the whole episode. Will there ever be a point for Greg and the Crystal Gems where talking about her won’t be painful?

Yes, I do believe there will be a point where Rose’s memory will be a lot less painful. I think for all of them, even Greg, there is still a huge, “Why?” hanging in the air. They all suppress [the question] out of respect for Rose and Steven. There are things they still don’t fully understand about Rose; understanding her better would help them all move on.

For a 14 year old, Steven’s very emotionally mature. He grew up watching everyone grieving, and though they tried to hide it, he was very aware. This made him feel really obligated to help them through it, and to live up to what they all expected from him.

But he’s really going through a shift now, because for a time everything he heard about his mother was overwhelmingly positive, but that perfect image of her is really falling apart, especially after his encounter with Bismuth. Now he knows she’s capable of making mistakes, huge mistakes.

Songs are often used to explore heavier emotions on the show. What is it about music that you think helps your audience process difficult feelings?

I love music as a storytelling device because there’s a whole other level of emotional detail you can get. I often write songs when I’m going through a hard time, to help me organize my thoughts: How I feel about something, how I want to feel about something. “I Could Never Be (Ready)” is definitely one of those. I want to accept that things start and end and that’s beautiful, and that’s life. But it makes me terribly sad, I’m such a creature of habit and I hate change, and I don’t want to accept that things end and that people leave. I think for this song, I was trying to make peace with the fact that I’m not at peace with change.

When [the show] is tackling heavier topics, I hope it’s clear that I’m trying to tackle these topics gently and respectfully. Steven Universe is not a tragedy or a dark comedy, it will always be warm and sweet. So if a heavy topic throws that into question, I find music can keep it clear that it’s meant to be a sweet and healing thing. The melody, the rhythm, and just the fact that something has to be sung instead of spoken — especially if I can write something that has that effect on me as I write it — can tell you worlds about a character and how they’re feeling.

Once you have an idea for the song, what’s the process of writing and recording it?

Often I sequester myself until a song is done enough that I like it.

Some songs come out really fast. “I Could Never be (Ready)” I wrote in a day. It came out so easy. I recorded it in my office when I had a second. Some songs take much longer. “It’s Over” took months; I wrote version after version.

When that happens, I’ll leave a trail of lyrics everywhere, scrawled out on concept drawings for other episodes I’m working on at the time, or on notepads, Post-its, sketchbooks, whatever’s near me when I think of something. I don’t get extra time to write music so I’ll jot things down while I’m working on whatever I have to do that day. Then I’ll hole up in my house on nights and weekends, experimenting till I hit on something I like.

Once I have it down, I pitch it to my crew, and if they like it, I record it at home or at work. [It’s] usually just a track of uke, and then I’ll sing over it — that’s what my actors hear when they record their vocals!

Sometimes I’ll shoot a song to my composers Aivi and Surasshu as I’m starting to work on it. They’re the absolute best, often they help me in advance, [meaning] they’ll work out a much more in depth demo and then I’ll sing over that. But other times the process goes the other way. The credits song, “Love Like You” was written totally by Aivi and Surasshu, sending me a piece of music at a time with an example of what they wanted the melody to be, and then I wrote and recorded the lyrics. It was such a puzzle, because I was locked into a certain amount of syllables to fit their melody.

Also, my storyboarder Jeff Liu and my writer Ben Levin will help me, [playing] guitar, bass and drums. Ben and Jeff and I will jam together. I came in with a version of “What Can I Do” from “We Need to Talk,” and when Jeff came up with the rhythm for it on guitar, and it totally transformed!

When Aivi and Surasshu get it on the back end as we’re finalizing the episode, they’ll replace the demo instrumental with a stunning final track. They are INCREDIBLE! I am always so moved and so blown away with what they do.

What happens if you don’t get a positive reaction when you pitch a song to the crew, or it’s clear the song isn’t quite working?

A lot of times I’ll pitch a loose vibe I’m going for before I’ve tied something down. Sometimes I’ll have some, but not all of the lyrics, and will talk over what else the song needs; “Stronger Than You” still needed its introduction when I first pitched it.

If I’m straying from the point [of the song], I’ll talk with my boarders and writers about what it needs to be, and try and get back on track. I don’t usually come in with something finished and then overhaul it. I think when I do, it’s usually me being critical of myself, being unsatisfied with something.

What’s the most difficult thing about songwriting for you?

I always want to outdo whatever song I just did, so I can get really in my own head about that. Sometimes I’ll make something complicated just so it’ll be different. But I don’t really want that, I want something simple and true. More often than not I’ll write something really busy, and then throw it away. The song that ends up in the show is me blowing off steam from trying too hard on the earlier version of the same song.

How collaborative is the songwriting process with the voice actors?

I love to collaborate with my actors on songs! I don’t always get the chance to do this but I love it when I do! I think of music like it’s drawing. I’m not very studied in music, I’m studied in drawing, so I trust my cast and composers more than myself when it comes to songs.

Estelle [who voices Garnet] has helped me with “Stronger Than You” and “Here Comes a Thought,” sending me references and talking ideas over with me. For “Stronger Than You” I described the episode to her way in advance, and asked her if she had any thoughts on how to write a love song mixed with a fight song mixed with a victory song! She said it made her think of “Gold,” by Spandau Ballet, and the theme from “Fame,” I listened to both of those a ton as I was starting — and of course I was really inspired by Estelle’s music. Estelle totally transformed the song when she performed it too; she’ll adjust things to make them work better, to fix harmonies and rhythms. I’ve learned so much paying attention to how she adjusts things.

I also collaborated with Kate Micucci on “Haven’t You Noticed (I’m a Star)”; we were emailing drafts back and forth. She came up with the bridge and the concept of this famous person having a bunch of false friends clamoring for her attention, it was perfect! That became my favorite part hands down.

I’d love to do this more with everyone! I rarely get a chance to since the show is always moving at breakneck speed!