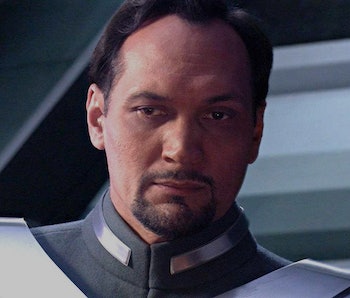 Spoiler alert from 1983: Darth Vader is Princess Leia’s father, but her adoptive dad is the heroic Bail Organa of the ill-fated planet Alderaan. The last time audiences saw Bail, he was assisting Obi-Wan Kenobi and Yoda as they scrambled to survive at the end of Star Wars Episode III: Revenge of the Sith. And now, Bail Organa, again played by Jimmy Smits, will return to aid the Rebel Alliance in Rogue One.

It’s been known for awhile that Smits would reprise his role as Bail Organa, a character that Smits technically originated in Attack of the Clones and Revenge of the Sith. (We never saw or heard Leia’s father in A New Hope; he was only vaguely referenced by Leia herself.) But now there’s an inkling of what Bail may be doing in Rogue One. A new photo has emerged from the an US Weekly special on Rogue One showing the former senator in garb that “isn’t as stately” as his previous Star Wars appearances, because Bail “isn’t as high on the political food chain.”

The political food chain referenced here specifically means Bail isn’t a senator in Rogue One anymore, because his daughter, Leia has taken the position. In A New Hope, Leia hopes the Death Star plans will be “safely delivered” to her father on Alderaan.

What does this mean for Rogue One? Well, it’s possible Jimmy Smits could show up in a Rebel briefing and say, “Hey, once you guys finish your mission, I’d really like those Death Star plans delivered to my daughter, and then sent to me safely on Alderaan, if at all possible. If that’s okay with everyone.” And while this sounds a little silly, much of Rogue One is bound to be an exercise in dot-connecting, meaning it might make sense to have a scene in which Bail Organa’s importance to the Rebellion is made clear. He may not be high on the legal political food chain, but he’s probably really influential with the Rebels.

Rogue One is being touted as a “standalone” Star Wars film, but with all the connective tissue between Revenge of the Sith and A New Hope intersecting in this film, it actually might end up being the most self-referential Star Wars movie ever. Case-in-point, two characters who existed primarily in cut scenes from Revenge of the Sith — Mon Mothma and Bail Organa — are major players in Rogue One. So, if Princess Leia’s adoptive father from the dreaded Star Wars prequels is hanging out in in a film which also features classic-era Darth Vader, then can super-secret cameos from other classic characters be far behind?

Rogue One, now with more Jimmy Smits, opens on December 16.