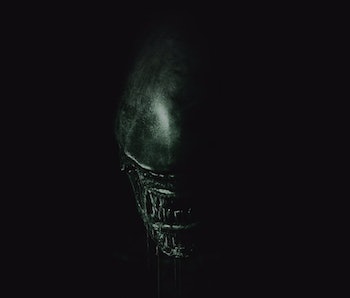 Ridley Scott’s second prequel in the Alien franchise, Alien: Covenant, has a new premiere date. There’s also a new poster to inspire your nightmares in the weeks to come.

Covenant has been described by Scott as being more similar in tone to the original Alien than the first prequel, Prometheus, so expect more chest-bursting horror elements on May 19, 2017 when the movie opens. (It was originally scheduled for an August 2017 release but was moved up, just in time for a cheery spring!)

Twentieth Century Fox announced the official plot synopsis in November 2015, revealing that Covenant is the second film in a prequel trilogy that leads to the events of 1979’s Alien:

“Ridley Scott returns to the universe he created in ALIEN with ALIEN: COVENANT, the second chapter in a prequel trilogy that began with PROMETHEUS and connects directly to Scott’s 1979 seminal work of science fiction. Bound for a remote planet on the far side of the galaxy, the crew of the colony ship Covenant discovers what they think is an uncharted paradise, but is actually a dark, dangerous world whose sole inhabitant is the ‘synthetic’ David (Michael Fassbender), survivor of the doomed Prometheus expedition.”

The new poster reveals what might be the recently identified “neomorphs,” which Prometheus actor Michael Fassbender revealed — possibly by accident — in an October 2016 interview with BBC Radio 2. Fassbender, who will be playing two separate roles in the upcoming Covenant, gave no other information away, but a report from AvPGalaxy later confirmed the neomorphs as being slightly “translucent” with a massive, pointed skull.

While the neomorphs seem to be relatively similar to the xenomorphs (at least in their desire to tear open ribcages from the inside out), there’s still little to know about them. Perhaps later posters and trailers from Covenant will reveal everything we desperately want to know about these nightmare creatures.

More like this
Entertainment
8.6.2022 3:00 PM
'Nope' editor Nick Monsour reveals the secrets behind Jordan Peele’s sci-fi monster
By Jeff Spry
Culture
7.28.2022 11:30 AM
You need to watch the most underrated sci-fi thriller of the '60s before it leaves HBO Max next week
By David Grossman
Entertainment
7.28.2022 12:00 PM
Nope ending explained: The deeper meaning of Jordan Peele’s sci-fi thriller
By Eric Francisco
Related Tags
Share: