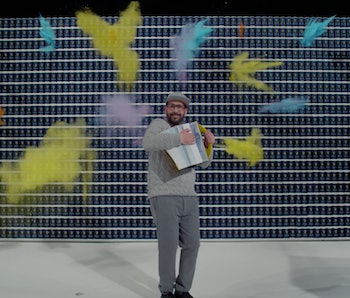 Once again, OK Go just proved they’re music video wizards — and this time they did it in just 4.2 seconds. Most of the action in their newest video for the song “The One Moment” was filmed over the course of 4.2 seconds of real time, but with some slo-mo magic, it became three minutes of a music video, complete with colorful paint and a lot of exploding objects.

You get a chance to see everything at live speed at the beginning, but it’s not until the footage is slowed down that you get to see just how complex and precise everything is. Colored salt explodes perfectly in time with the beat, a flip book of the singer matches up with the words, and guitars blow up with each strum of the guitar. After all that action, there’s some real time singing, then another slo-mo scene that took only another three seconds to film.

This video is a lot more complex than some choreographed dancing in someone’s backyard. Segments of the video were shot at different frame rates then slowed down to what we perceive as real time, about 30 frames per second. The part when the guitars explode was shot at 6,000 frames per second, while the exploding watermelons were shot at about 4,500 frames per second. Throw in lip syncing and flip books, and you have some complicated choreography to manage. That’s why singer Damian Kulash, Jr. wrote on the band’s website that it took “a motherfucker of a spreadsheet” to make it all happen.

The band collaborated with Morton Salt on the video, for Morton’s #WalkHerWalk charity campaign. (If you look closely at the beginning of the video, the wall is made up of canisters of Morton Salt.) You can watch the whole video below.