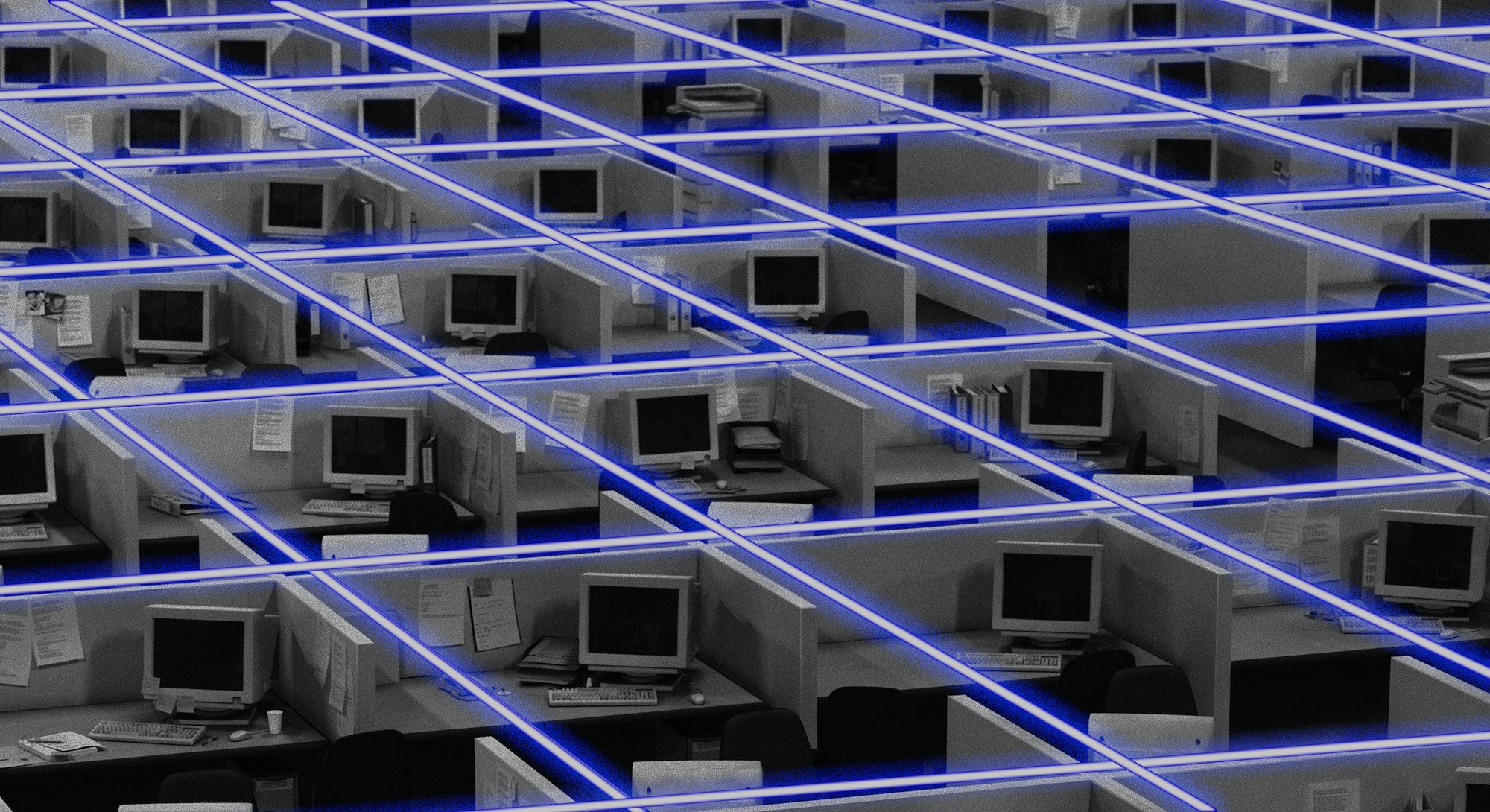 Robert Propst had an idea, a bad one as it would turn out, but a revolutionary one nonetheless. By placing thin plastic walls covered in gray felt between the desks of coworkers, he could create privacy in public spaces and make a mint for his employers at Herman Miller. So he went around the country, commandeering showrooms, and selling the idea of the cubicle to a burgeoning class of middle managers. Propst started proselytizing in 1967 and, by 1970, he’d created a new normal. It may have been the blandest revolution in history, but it changed more than office layouts. It changed how workers thought.

The industrial cubicle farms of the 1980s have largely been abandoned for white-collar workplaces built to to telegraph specific values: transparency and equality. Since the nineties, startups have led this charge by embracing layout so open and accommodating that they feel like rebukes to Propst’s privacy fetish. But just because a work space looks like a living room, doesn’t mean employees will feel comfortable living in it. In fact, modern offices seem purposefully built to maximize psychological discomfort. The rejection of the cubicle on aesthetic and visceral grounds has given employers the pretext to wage a quiet war on the individuality of workers.

“Open layouts have been shown to invite collaboration, but at the same time can make people feel like they don’t have privacy or spaces where they can go to do focused and reflective work,” says Tonya Smith-Jackson, researcher at the Human Factors and Ergonomics Society and professor at North Carolina Agricultural and Technical State University. “In the workplace, what free expression really means is a place compatible with our natural inclination to take care of ourselves, build a quality of life and have a sense of wellbeing.”

Smith-Jackson is quick to note that office layouts don’t always mimic the culture of a business. If a company encourages free expression, she says, the physical environment has an insignificant effect on the mentality of coworkers — and vice versa. It’s easy, in short, for a business to give off egalitarian vibes without adopting an egalitarian ethos. By coupling inclusive spaces and exclusive ideas of decorum, managers can create a cognitive dissonance that curdles into confusion.

This is a particular problem with open plan offices because the overabundance of public space leads to a paucity of private space people can actually control. Sure, workers can look over each others’ shoulders, but proximity is not democracy. Power over communal spaces is often exercised in a dictatorial manner. This can present a productivity problem as well as a morale one.

“Everything is designed for clarity and openness, suggesting you’re supposed to personalize your desk and express your individual taste,” says Marc Hassenzahl, Professor of Experience Design at Folkwang University of the Arts in Germany. “On the other hand, you’re not allowed to personalize it in a way that wouldn’t be in line with company values.

In these settings, employees have to navigate the line between displaying their authentic selves and maintaining a professional veneer. To that end, the pictures displayed on desk probably won’t depict wild, drunken evenings with friends. Posed family photographs might make for more appropriate desk decor, though Hassenzahl has encountered scenarios where even these could prove controversial

“I was working in South Korea and someone told me that you’re not allowed to have a picture of your partner on your office desk if you aren’t married,” he says. “You’re told that you can bring a little of your private life into the office by the organization, but you’re then subjected to a lot of different restrictions that seem at odds with that concept.”

By convincing employees that they are at least somewhat free to express themselves then policing those expressions either explicitly or socially, companies are able to apply pressure on their workers to reconfigure — at least within the office setting — their personas. If the environment cannot be changed to suit them, they change to suit the environment. This is why Hassenzahl tells office workers to keep secret digital pictures and look at them frequently. Even barely observable social pressures can wear down a worker.

And efforts to compromise over shared spaces can do the same.

“If you feel like you have ownership over something, then you have some stake in the larger organization,” explains Professor Graham Brown, whose research specialism at Canada’s University of Victoria is the impact of built environments and design on humans. But territorial behaviors can be distracting for the individual engaging in them, and can create problems and conflict with colleagues.”

Brown points out that we design our individual worlds to promote our own happiness and that conflict over the design of shared spaces is therefore emotionally fraught. This is doubly true in offices where people have heterogenous opinions on what work should feel like. Generational rifts, in particular, are not solvable with any amount of feng shui.

Older workers are much more sensitive to the work space as a potential territory” says Brown. “Younger people seem to be much less worried about space, and much more concerned about working conditions.”

These differing expectations with the workplace could explain the growing prevalence of coworking spaces, not only across America, but everywhere from Nairobi to Chiang Mai. Workers in these offices can define their own norms within their own offices without concern for a broader ethos. Because many coworking space users telecommunicate, their company’s norms may inform their choices without defining them.

“A lot of companies will draw people in with the various expected startup features: ping pong tables and that kind of stuff,” says Iskender Piyale-Sheard, community manager at Toronto coworking hub, Lighthouse Labs. “But the more important thing is making people feel like they belong and have value in their workplace.”

Propst tried to solve a cultural problem by building walls. It didn’t work. Startups have tried to solve it by tearing walls down. That hasn’t worked either. As it turns out, the only way for a business to avoid oppressing its employees is for a business to actively try not to oppress its employees. Most don’t and — if past is prelude — most never will.