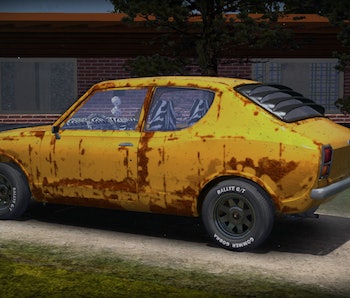 Johannes Rojola isn’t interested in a making a typical car game. And compared to video game racers that fetishize automotive fantasy like Gran Turismo and Forza, My Summer Car — which bolts the wild antics of a bored teenager in the 1990s Finnish countryside onto its mechanical framework — is anything but.

Joking aside, Rojola is serious about making My Summer Car (out now on Steam Greenlight) the opposite of what you’d expect from a racing simulator. Rojola’s website for the game is straight out of 1997, adorned with ridiculous GeoCities-era gifs, scrolling text, and charmingly tacky wallpaper.

Rojola’s reasoning for creating the game is straightforward: It just needs to exist.

“Why does it need to be made? Because I waited for many, many years for this game and nobody was making it,” he says, lamenting a need for something new in car games.

“The game is mainly made for players that have a history with car games in general — I want to see a car game that finally after all these years (decades) dares to be little different,” Rojola says. “It is also for those people who do not like car games in particular, but might want to experience that genre from [a] new point of view.”

What he’s made is definitely a deviation. While the technical aspects of amateur mechanic role-playing are as realistic as you want them to be — you build your old clunker from scratch and can fiddle with any aspect of it you want — it’s the game’s outside trappings that give it personality.

You can steal fuel if you want, and when driving, feel free to stick a hand out the window to give the world the finger. There’s a lot of beer involved too; you can meet drunken people and get wasted yourself (including in your car), provided you find a way to earn some cash to pay for all the booze.

“I grew up in small village and for some period I had an old [1960s] BMW. But I was more into mopeds and computers,” he says. “Then again, [it’s] autobiographical for all of us Finns who were or are living at the countryside. [It’s] a generalized view of our lifestyle — no particular cues into my life — but we know our source material, and that is the most important thing to have for any creator.”

“The Finnish setting was just natural theme for the game I was making, as it is something I know about without needing to pretend I do,” he continues. “For the majority of players it is still mostly about building the car and getting it to work. That always was the main focus and will be during the development. But yes, car cannot exist in a vacuum — [it] needs meaningful interactive environment around it.”

By using the car as a focal point, there’s a real sense of player investment, too.

“What if the car building was really difficult and painstaking?” Rojola says. “I wanted to see how the player relationship changes towards the car when actually having go through lot of things to make it work — they can experience feelings of great accomplishment but also total loss when something goes horribly wrong.”

My Summer Car even has permadeath to emphasize the idea. Make a catastrophic mistake with the vehicle, or simply collide with something at too high a speed, and that’s it.

“[I want to] provoke great fear of loss when driving a car. Driving fast needs to be dangerous in this game because in other games it never is,” Rojola says. You also have to take care of the character themselves, giving you motivation to keep using the car.

“The minimum reason to drive is to go to the store to buy food and fuel,” he says. (Thankfully, the car can always be fixed.)

Regardless of if you choose to play My Summer Car as a hardcore simulation or more of a lifestyle experience, Rojola wants to see other others start playing with the racing formula a bit. And so far, the fan response has been positive and strong. And Rojola couldn’t be happier.

“Something I believed in all these years was not just me hallucinating about some crazy random car game,” Rojola says. “If [games] provoke some strong feelings especially within an uncommon genre, I think it is a very good thing for the game.