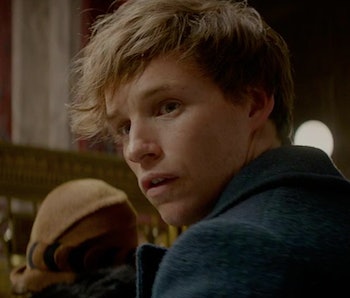 Just who was Fantastic Beasts made for? Children? Or adults who used to be children and still love Harry Potter? Now that any and all compelling children are out of the picture in Fantastic Beasts and Where to Find Them, it has cast the franchise into a sort of audience no-man’s land.

The most unrealistic thing about the fantasy world that J.K. Rowling built in the Harry Potter movies is the fact that young children are forced to handle adult tasks such as clandestine warfare and solving murder mysteries. In contrast with this heavy stuff, the magical spells seem tame. Rowling’s original stories presented a kind of Boxcar Children in Narnia epic, and children around the world bought into the adventures, no matter how dark they got. But now, Rowling’s wizarding world is done with all the kid stuff: Adults are the focus of Fantastic Beasts and Where to Find Them.

The only actual child in the film, Modesty (Faith Wood-Balgrove) is without any interesting character traits or compelling backstory; she is simply helpless and innocent. Newt Scamander’s (Eddie Redmayne) magical creatures provide the correct amount of wonderment, awe, and whimsy you’d expected from a movie which promises to have things called “Fantastic Beasts” in it. Meanwhile, the rest of the movie is burdened with a confusing dark-magic plot in the wizarding world and breaks that happy promise. And without children to lead young audiences through it, will they really care?

Whenever Newt is with his creatures, and having madcap adventures with the hapless wannabe baker Jacob Kawalski (Dan Fogler), you’re watching what feels like a great contemporary kid’s fantasy movie, but starring grown men who have no children in their lives at all. And then, as Graves (Colin Farrell) interrogates Newt and Tina Goldstein (Katherine Watersone), it becomes a dark urban fantasy that works double-duty as a pre-WWII historical allegory. Rowling is no stranger to heavy-handedness in her Potter books, but the tonal inconsistencies of Fantastic Beasts and Where to Find Them feel like you’re watching Rowling try to combine Schindler’s List with Mary Poppins — and, again, without the children who were the focus of that magical nanny.

Both children and adults can understand why Harry Potter riding a broomstick triumphantly is awesome. But other than people who are already Potter fans, what are people getting out of these hardcore wand battles in Fantastic Beasts? With the Harry Potter series, Rowling’s adult themes were introduced into the story incrementally: As the children grew, the stakes were raised.

In Fantastic Beast, everything is already turned up in intensity, with no real characters with whom we can relate or want to see succeed. We’ve got fully grown-adult wizards, some former Aurors (wizard cops) some Beastmasters, and goblin gangsters, all without introduction. Fantastic Beasts is like imagining if the first Harry Potter book/movie wasn’t the The Sorcerer’s Stone but instead, The Cursed Child. The only way for someone to enjoy all aspects of Fantastic Beasts is to not be a child, and to have already been a Harry Potter fan before you watched it. Obviously, the reverse is true of the regular Harry Potter series viewed/read in order.

So, Fantastic Beasts is clearly aimed at adults: adults are its stars, and the goings-on of the adult magical congress control the plot. But, it’s not at all welcoming to adults who are non-Potter fans. With the character of Jacob, the film almost had an audience surrogate. Through Jacob, the entirety of the wizarding world could have been explained to a lay person in the audience. But outside of Newt showing his creatures to him, the poor confused Muggle baker learns nothing of the rules of this secret magic world, and what remains in his memory by the end of the film seems unclear.

This goes double for the uninitiated adult moviegoer who doesn’t know anything about Harry Potter: Much like Jacob, they’ll go on an adventure, but probably won’t remember it. If you don’t have any idea who Grindelwald is in the context of Harry Potter history, then certain references and reveals will fall flat. And that goes double for a child. Even a child who is eight years old right now and in the middle of reading the sixth Harry Potter book, The Half-Blood Prince, would probably have a hard time telling you why Grindelwald is important. And that’s because Grindelwald and Newt Scamander were elements of backstory, not characters on which an entire franchise was hung.

There’s an assumption that the Harry Potter universe is a tightly-woven intricate fantasy world, in which everything J.K. Rowling has created makes sense and has definitive answers. When C.S. Lewis created a definitive origin story of Narnia with the prequel The Magician’s’ Nephew, many critics argued the magic of The Lion, the Witch, and the Wardrobe was lost. In her book The Magician’s Book: A Skeptics Adventures in Narnia Laura Miller writes, “Some lines in The Lion, the Witch, and the Wardrobe don’t make much sense if you presume that its readers are already familiar with The Magician’s Nephew.”

As a backstory to Harry Potter, the larger wizarding world was exciting in part because of what we didn’t know about. Sure, in fairness, the concept for Fantastic Beasts is interesting, it’s just that the choice of subject matter for this new entry in the Potterverse comes across as a little arbitrary. Because if these movies aren’t for kids, and aren’t really even for hardcore adult Harry Potter fans, then who are they for?

Rowling must be enjoying herself in writing these movies, but she seems to have forgotten the key reason the Harry Potter books were loved by children and adults. Many readers and moviegoers saw themselves in those children, in those characters. Fantastic Beasts might have spells, but it doesn’t have those kids, who, were in fact, the real magic.