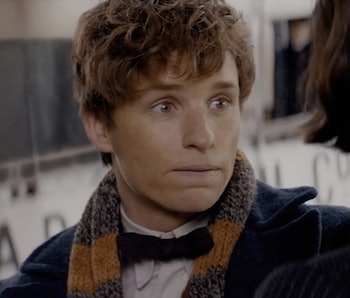 The Coalition for Better Treatment of Hufflepuffs’s poster boy, Newt Scamander, got teary eyed over the ill treatment of Hogwarts’s Hufflepuff House in a new PSA video. Then he told everyone to “fuck off.”

Hufflepuff hate has always been rampant in Harry Potter circles — after all, Gryffindors are brave, Ravenclaws are intelligent, Slytherins are cunning, and Hufflepuffs live near the kitchen (and are characterized as being loyal). But in celebration of this Friday’s premiere of Fantastic Beasts and Where to Find Them, Eddie Redmayne (Newt) put together a video with MTV to tell the world exactly what he thinks about Hufflepuff hate.

“You know what I see in Hufflepuffs?” Redmayne says as he chokes up. “I see loyalty. I see fierce friendship. We are hardworking, we are compassionate, and at the end of the day, we’re going to do the right thing, and not because of the glory. Not because of the glory, but for the greater good.”

He promptly follows this with: “Because fuck it … Sorry, it’s naughty to swear.”

And, as Redmayne points out, he’s not the only significant Hufflepuff out there. There’s Cedric Diggory (Robert Pattinson) and Dwayne “The Rock” Johnson on his side. Unfortunately, Redmayne forgot some badass Hufflepuffs along the way: Professor Pomona Sprout, Nymphadora Tonks, and Teddy Lupin were all notable and powerful Hufflepuffs as well. But that’s nothing to hold against him or his House-mates.

So, sorting hats off to Hufflepuffs everywhere. Catch Fantastic Beasts and Where to Find Them in theaters this Friday, November 18.