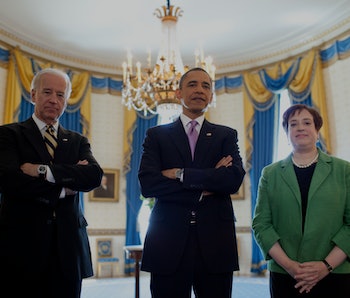 It’s been well-established that former Vice President Joe Biden is the most memeable politician of our time. Clad in aviator sunglasses with a folksy smile, the gaffe-prone Biden made for perfect meme fodder as the juvenile foil to President Barack Obama’s elevated demeanor.

Biden’s meme bona fides got a boost on Tuesday after saying that, as a young man, he would’ve fought President Donald Trump because of the way our current President has treated women. “If we were in high school, I’d take him behind the gym and beat the hell out of him,” Biden announced at a University of Miami rally.

True to form, President Trump retorted with a sick Twitter burn. “Crazy Joe Biden is trying to act like a tough guy,” the President of the United States wrote. “Actually, he is weak, both mentally and physically, and yet he threatens me.”

And then the memes came.

Biden’s recent spat with President Trump is just the tip of the meme iceberg — good ol’ Joe has been the muse of mischievous meme-makers for many years. The extensive catalog of Biden memes could intimidate even the most intrepid internet explorer sifting through the meme world. But don’t panic! Inverse has curated a selection of premier memes for your perusal.

Here are the top 50 Joe Biden memes of all time:

49. He’s gives the people what they want.

45. Biden does what he wants and nobody gets to tell him otherwise.

44. Because there ain’t no party like an Oval Office party.

42. RIP to the greatest bromance that’ll ever exist.

41. The oldest play in the book, works every time.

39. Not letting the new guy off easy.

38. He still thinks it would’ve worked.

37. He wanted to plan a special welcome for the President-elect.

35. Never one to back down from a fight.

32. Especially if you are Donald Trump.

30. He’s not letting anybody off the hook.

29. And he’s not above going for the low-hanging fruit.

27. There’s no time to ask permission.

26. Say what you will, but Biden always speaks his mind.

20. They’re probably all off-brand bottles, too.

19. At least his priorities are in order.

18. He knows what really matters.

17. Biden is a master of psychological warfare.

10. He also requested a bulk order of Doritos.

8. Don’t begrudge the man his souvenirs.

6. Laying down some ground rules.

2. The real mastermind in the White House.

1. Always part of the family.

Editor’s Note: This article was originally published on November 20, 2017, and has been updated with new information by Kevin Litman-Navarro.

More like this
Science
Feb. 4, 2023
Why ChatGPT Could Usher in a New Era of Scientific Discovery
By Brian Lucey, Michael Dowling and The Conversation
Gaming
Jan. 25, 2023
"Mindboggling" Launcher layoffs prompt outcry and tributes to WaPo gaming vertical
By Jess Reyes
Culture
Feb. 5, 2023
Genius things you didn't know you were missing in your home — & they're all super cheap
By Veronika Kero
LEARN SOMETHING NEW EVERY DAY.
Related Tags
Share: