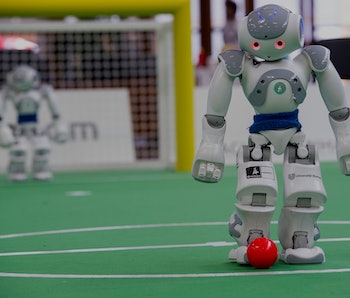 Japan’s Todai robot is giving up on going to college for now, in order to take some time off to think about what it all means, and maybe write a little. Researchers in Japan recently abandoned their plans to teach Todai, an A.I. and machine-learning robot, how to pass the University of Tokyo’s entrance exams by 2021. Todai simply couldn’t understand all of the exam’s questions, so the team announced Monday that it’s going to focus on teaching it the skills needed to handle written responses.

Members of the National Institute of Informatics said that Todai is “not good at answering a type of question that requires the ability to grasp meaning in a broad spectrum.” This means that even though the A.I. has improved its test scores on mock exams since it first started in 2011, it’s going to abandon its quest.

These limitations affect many different A.I. projects. Todai simply doesn’t think like humans do, as researchers explained on Monday. It can’t apply critical thinking to questions; it simply tries to understand what the question is asking so it knows what kind of formulas it should use to find the right answer.

Those limitations are what inspired Todai’s researchers in the first place. “The key point is that what’s difficult for people is different than what’s difficult for computers,” sub-project director Yusuke Miyao said in 2013. Computers excel at calculations but struggle with unclear rules, he said, and these exams required the team to tackle both problems at once.

Teaching A.I. to think more like humans is a common goal. That’s why Google’s DeepMind is learning how to recognize objects at a glance, for example, or experience physical feelings the same way we do. It’s not enough for A.I. to be smart; it also has to think like us.

That hasn’t happened yet. A.I. have learned how to do everything from encrypt their communications to write some catchy pop songs, but they’re still more “artificial” than “intelligent,” at least by our understanding. Todai throwing in the towel is a symptom of those limits.

Still, it’s comforting to know that while A.I. is coming for our jobs, at least we don’t have to worry about competing with it to get into a decent college. We don’t have to freak out about the A.I. apocalypse anytime soon. Todai’s failure is a victory of sorts.