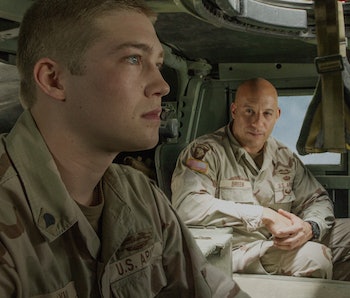 Ang Lee, who won Oscars for Life of Pi and Brokeback Mountain, is pushing the boundaries of cinema again. But the general public may never get to see his latest innovation, because Billy Lynn’s Long Halftime Walk, which was shot at 120 frames per second, requires special equipment to project such demanding technical specifications. Only five theaters around the world are capable of showing the movie, which follows a young war hero during a short return home for Thanksgiving, as Lee intended it to be seen. For most viewers, Billy Lynn will seem like a strangely shot character study, but those with access to a Christie Mirage 4KLH projector will see the potential future of cinema.

“The general standard is 24 frames per second for cinematography,” Mitch Martinez, a cinematographer who has worked with 120 fps cameras, tells Inverse. “This is what we generally relate to a filmic and cinematic visual look. When frame rates are captured and played back at faster than standard rates, the perceived motion and look of the footage is affected; the look is different.”

Simply put, a film shot and projected in 120 fps looks brighter and more lifelike. This is due to an effect called Temporal Resolution.

“If something is moving across the screen, it moves much smoother, much more like real life,” Dr. Don Shaw, the mind behind the 4KLH projector, told Inverse. “As opposed to in a cinematic experience, something’s moving across the screen. Then, you can see it sort of stuttering. We call that ‘jutter’ in the movie industry. [With 120 fps], it’s almost like looking through a window as opposed to watching a film.”

Lee also decided to shoot in 4K instead of the standard 2K resolution, which captures and projects four times as many pixels per image, an increase in what’s known as spatial resolution. “The effect, Shaw says, is “If you got close up on a still frame, you’d see much finer details. Diagonal lines wouldn’t be jagged, they would be really sharp and crisp.”

The combination of 120 fps and 4K is what really makes such a drastic difference. Together, they make for 20 times the numbers of pixels that viewers see, providing some overwhelmingly real images. When Billy Lynn opened the New York Film Festival, many critics were turned off and some physically sickened by the change, which was far more drastic than the 48fps that had disturbed critics when Peter Jackson presented his Hobbit films several years ago. One critic said the characters looked like they were “cut-out with scissors from a glossy magazine.” Many others agreed that the scenes in a gigantic football stadium, where most of the film takes place, were so realistic that they seemed artificial (action-packed war flashbacks were less problematic). One of the most frequent complaints was that the film was too bright — but that too was done on purpose.

“When you go to your local cinema and watch a 3D movie, you’re seeing brightness levels of a three to six foot-Lamberts (fL),” Shaw explained. “One of the biggest complaints people have with 3D movies is they’re not shown bright enough. Typically a 2D movie is shown at 14 fL. That’s what we size all the movie theaters for. When you bring in all your 3D gear, the glasses and polarizers, those things effectively absorb 70 to 90 percent of the light. And you’re left with three to six fL on screen.”

That’s where Billy Lynn is so different.

“The most important thing that I think he’s done is that he’s bumped it up to 28 fL in brightness, in 3D,” Shaw said. “You need a lot of hardware to do that, including laser projection.”

And that hardware is very, very expensive; while Shaw wouldn’t give an exact price tag, he said it was about ten times more expensive than a normal cinema projector system. And those aren’t cheap, either; when movie studios began to demand that theaters be able to project digital files instead of actual film, many small-town theaters couldn’t pay the huge price of the upgrade, which ranged between $50,000 and $100,000.

“The cinema projectors that are in typical cinemas, they adhere something called the DCI standard. And that was made 12 years ago, and it was supposed to represent the minimum standard of all digital cinema projectors. That standard has not evolved very much since it was published twelve years ago, so the cinema equipment is sort of in the same spot,” Shaw said.

Sony paid for the five projectors to be installed temporarily in the five theaters, and its unlikely to take hold more broadly any time in the near future.

“Outside of cinema, there’s been demand of much higher bandwidth, much higher resolution, much higher frame rate projectors,” he said. “The Mirage 4KLH was primarily designed for theme park, simulation, and visualization applications.”

You’re most likely going to find a Christie Mirage 4KLH if you’re working for military contractors, universities, or auto manufacturers. It’ll take years for them to reach theaters in more than limited, one-off situations, and it may never be an in-home entertainment option. But 120 fps will continue to be experimented with, and Martinez predicts it will find some specific niches.

“With all of these elements done properly, the audience can really have an epic experience that feels like you’re right there,” he said. “Looking down the line, the method and technology is going to shine in anything with fast action is going to really benefit. Think of sports, brilliantly choreographed fight scenes, alien invasions, epic battles in fantasy worlds.”