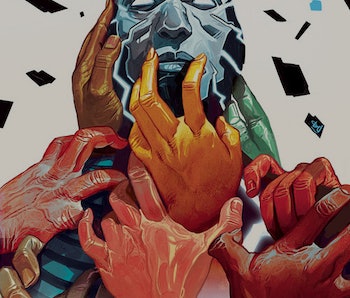 The Inhumans franchise has ushered in a whole host of new superheroes and villains into the Marvel Universe. Some of those people have abilities that surpass some of Marvel’s most powerful characters. For example, Moon Girl, a nine-year-old Black girl from the Lower East Side of Manhattan, was recently declared the smartest character in the Marvel Universe.

Possibly the brightest side to the Inhumans franchise is that it allowed Marvel to create new characters of different ethnicities, backgrounds, and ideologies that were not spin-offs of old characters, like Miles Morales or Ironheart, but new, fresh heroes with their own powers and personalities. Mosaic is one of them. As writer Geoffrey Thorne tells Inverse, “He’s going to interact with superheroes. He’s going to interact with supervillains. And he has to decide what he is going to be.”

Developed by writer Geoffrey Thorne and illustrated by Khary Randolph, Mosaic is one of the newest characters to get his own franchise. He first made his debut in Uncanny Inhumans #11, where we saw a glimpse of his powers. Although he was originally marketed as a superhero, Mosaic’s complexities and background have the ability to create one of the most powerful stories in the Marvel Universe; his abilities will allow him to choose the life of a hero, or the path to becoming one of the worst villains in Marvel’s world.

When the comic begins, Morris Sackett is a cocky, pro basketball player just coming off of winning a title with his team. Every woman wants to be with him and every man envies him. The only person from whom he seeks approval from his father, and everybody else is merely a blip on his radar. But then he comes into contact with Terrigen Mist, which transforms and disfigures him. He loses his physical body and must inherit other people’s bodies in order to live. While he is in the other person’s body, he has access to all of their thoughts, emotions, and abilities. He is virtually undetectable and can gain access to nearly anyone.

Thorne wants to make sure that we do not jump to any conclusions with Mosaic. When asked if he’d classify Mosaic as an anti-hero, he said, “We think we’re the heroes of our story, but most of us are not black or white. We’re grey. […] Wolverine is an anti-hero; he murders people. Mosaic is not a hero, yet. But, anti-hero might be too far to count.”

Thorne wants us to keep in mind that this is not a superhero story, but a story about a guy who received powers in a traumatic way and has to deal with the repercussions of having them. The nature of his powers allows Mosaic to experience the world from the perspective of various individuals. As a person who was a rich, Black person whose status kept him out of the reach of a lot of social issues, his powers will force him to confront a lot of problems that somebody of his stature would not usually have to deal with. However, these issues will not just be thrown in the face of the reader. Thorne says, “It’s not going to be blunt and straight up. I do write that kind of stuff, but this isn’t shaped like that. It’s going to be a lot more subtle then people will expect. While some writers us a giant hammer and hit you with it, what I do is use a scalpel. By the end of Issue 5 or 6, you’ll see what I was getting at with the story.”

Mosaic will be filled with a lot of revelations, and as Morris learns more about himself and his powers, we will figure things out as well. Thorne says that Morris “will get a lot of tough love from the Marvel universe”, which is to be expected. His powers will be the most challenging to contend with when the X-Men finally take on the Inhumans in the new Inhumans vs. X-Men comic coming in December 2016. We should be happy that we have the chance to grow with a new character and see his development into what kind of hero or villain he will become.

More like this
Entertainment
Jan. 19, 2023
Ant-Man 3 interview proves Marvel is taking the wrong lesson from Jodorowsky’s Dune
By Ryan Britt
Entertainment
Jan. 12, 2023
Harry Styles’ Eros is returning to the MCU — but why?
By Eric Francisco
Entertainment
20 hours ago
Corey Stoll could have the chops to make a live-action M.O.D.O.K. work
By Mónica Marie Zorrilla
LEARN SOMETHING NEW EVERY DAY.
Related Tags
Share: