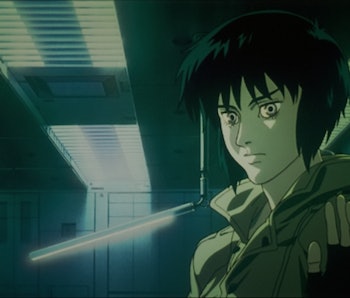 If Mamoru Oshii — the director of the original Ghost in the Shell anime — is to be believed, then the new film will honor the continuity and spirit of his beloved classic.

In a new featurette for Rupert Sanders’s forthcoming live action version Ghost in the Shell, behind the scenes footage shows the Major (Scarlett Johansson) running through the streets intercut with small snippets from original 1995 Ghost in the Shell animated movie, assuring us of the similarities. The director from the first film, Mamoru Oshii, stopped by the set and gave some of his thoughts.

Despite the white-washing scandal that might forever taint the film, Oshii tells us that the new movie might be “the most gorgeous film in the series so far.”

The director also praised Scarlett Johansson in her role as the Major, saying that she went above his expectations for this film. This is a big endorsement as the original Ghost in the Shell is heralded as one of the most influential films in cinematic history.

Oshii is considered to be a genius director for his work with the animated films and he is not the type of person to hold back his comments if he does not think that something is actually good or worth viewing. So far, many of the scenes shown in the trailers look like an exact replica of the anime. The hype for the film is surely building and we will surely see it come to a head when the first official trailer for the movie is released on Sunday.

More like this
Culture
6.28.2022 11:00 AM
5 years ago, the director of Parasite made his most unsettling sci-fi movie
By Allyson Johnson
Entertainment
7.2.2022 4:00 PM
Next Exit is the existential road trip sci-fi fans need — here's why
By Eric Francisco
Entertainment
6.29.2022 10:30 AM
25 years ago, Nic Cage made his most explosive sci-fi movie ever — it was almost even better
By Jake Kleinman
Share: