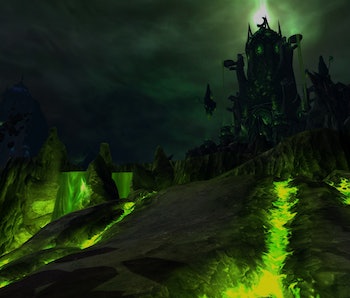 The reaction to the election of Donald Trump has been extreme on both sides of the political spectrum. The left has been crying while eating crow and the right has been crowing while crying havoc. Naturally, these reactions haven’t occurred exclusively in social streams, during protests, or in the context of heated family discussions. Azeroth, the digital homeworld of World of Warcraft players, has been politically polarized as well.

As the news of an impending Trump presidency settled in, Inverse spoke to World of Warcraft players about their reactions and the ways in which real world politics has penetrated into digital spaces traditionally more concerned with the economics of orc-dom.

“I’ll be wandering around a bit more today, staying out of the main Warcraft cities since much of the chatter there is a reflection of everywhere else,” a player with the handle Fionnula said. “I actually feel a bit sad. Most of what I have read today has been so negative and hateful. I have friends and family on both sides of the spectrum. The reactions from today have split many apart. The immediate response that those who voted Trump were horrible people does not reflect many of the people I know.”

That same chatter has convinced other players to avoid participating in trade or general chat during their daily World of Warcraft play.

“I’ve been straying away from trade and just trying to do some quests, but nothing too serious because it can be hard to focus with everything going on,” said Hearthvaderz. “I liked seeing people compare Trump to Sargeras, though. I was super disappointed in America, and I’m figuring out ways to do something about it in my community.”

The view of helping others was one shared by many players concerned that the divisive cultural politics embraced by the president-elect would lead to aggression in all areas of human interaction.

“I’ve been following social media closely since Trump was elected last night. I feel a lot of anger as much as the world does,” said Shaunnag. “I will give my support where it’s needed.”

“It’s unfortunate and upsetting, but I can’t not accept the results,” Cerunas said. “I’m trying to take my mind off the fact that one of the most bigoted figures in American media is now the president-elect.”

But the reactions weren’t all anti-Republican or anti-Trump. Some players evinced pleasure with the election results (“Clinton was not fit to be president,” said Aku. “Today? I’m just here leveling my character”). Others had embraced a sort of in-world apathy, presumably born of the notion that Trump’s policies would not, ultimately, affect Azeroth itself — even though they will likely affect a significant portion of its population in material ways.

“I’m shocked and uncertain of the effects that will happen,” said Bakenstein. “But, I’m not doing anything out of the ordinary in WoW. I idle and watch the auction house and trade chat while I’m working, just like any other day.”

More like this
Gaming
5.15.2022 2:30 PM
2022 game releases: The 14 biggest games launching this summer and fall
By Robin Bea
Gaming
5.11.2022 8:05 PM
Everything we know about the crab souls-like Another Crab’s Treasure
By Hayes Madsen
Gaming
5.10.2022 7:00 AM
Eiyuden Chronicle: Rising is a captivating prequel with too much busywork
By Hayes Madsen
Related Tags
Share: