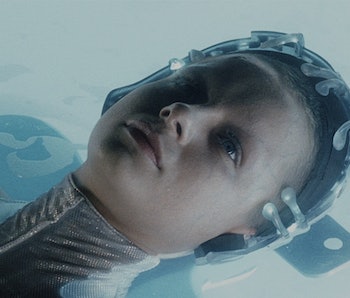 Seeing into the future, a blind Bulgarian clairvoyant made a chilling prediction about the 2016 U.S. election from beyond the grave. And it just might qualify her as a precog from Minority Report.

In the Philip K. Dick-predicted future of Minority Report, “precogs” (short for “precognitive”) predict crimes which haven’t yet happened, allowing for murder to be all but eradicated. In the original Dick short story (the basis for the 2002 Spielberg film) the precogs can see through time for about up to two weeks. But the well-known Blind Bulgarian clairvoyant named Baba Vanga, had a greater soothsayer range: closer to two decades.

According to certain — albeit sensational — news sources, Baba Vanga supposedly predicted the events of September 11, 2001, the election of Barack Obama, and also said that he would be the last U.S. President. Vanga made these predictions prior to her death in 1996, but her soothsayer persona would have fit right in with Minority Report.

Another Philip K. Dick story titled “Faith of Our Fathers” also briefly featured a “Beware the Ides of March”-style soothsayer, which lead to the main character discovery startling truths about who was really in control of the country. Hint: They’re not entirely human.

The precogs of Minority Report are in some ways the total heroes of their story. And if one of them was living among us, it might be time to start seriously considering consulting a few more Philip K. Dick novels and short stories in order to see into the future of American.