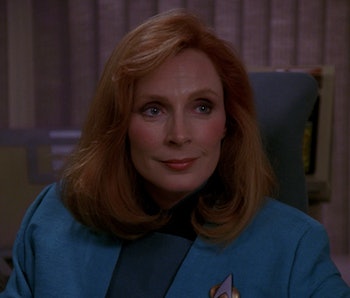 The crew of Starfleet’s USS Enterprise had the utmost admiration for each other and the beings they met throughout their time in space. Despite race, gender, religion, or creed, the crew of Star Trek: The Next Generation were an open-minded, welcoming family. And Dr. Beverly Crusher, despite her position as a medical officer and a woman, was always respected by her crew; they never doubted her for a second.

In Episode 3, Season 4 of Star Trek: The Next Generation, “Remember Me,” Dr. Beverly Crusher is, in the most basic sense, wholly respected by both her commanding officer and the rest of her crew. As Chief Medical Officer, Beverly has no power of command outside of the medical unit on the Enterprise. But when Starfleet members start disappearing one by one and Beverly is the only person with any memory of them, her sanity, her competence, and her position are never called into question by Captain Picard or anyone else aboard.

Lawyer Mirah Curzer recently rewatched “Remember Me” and was so inspired by the underlying — yet obvious — message presented by the creators of The Next Generation that she felt the need to write about.

Curzer, inspired by the “radical” statement of the creators, writes: “And even after Picard has asked Beverly to see the counselor because he thinks she may be having memory issues, he still trusts her. She asks him to turn the ship around even though she has no evidence to present but her own memory, which is contradicted by everyone else’s memory as well as all the physical evidence. And still, he responds: ‘Your word has always been good enough for me.’”

“‘Remember Me’ is a masterful piece of television, but it’s more than that,” Curzer writes. “It’s a utopian vision of allyship and a model for how to respond to the lived experiences of women demanding solutions to a problem their male colleagues don’t even perceive.”

Beverly’s perception of her crew and her captain is that of a healer — a doctor with particularly empathetic ties to the members of the Enterprise due to her position. Her having what could easily be perceived as a breakdown — and what definitely would have been perceived as such in our own reality — was treated with respect. The crew believed her. They trusted her as much as they trusted their captain, as much as they trusted themselves.

Much like in our own world, nothing is ever perfect, and Star Trek’s Starfleet has had its problems throughout the generations. But it has always been a far more accepting and open-minded world than ours has ever been. Perhaps we will one day reach that point.