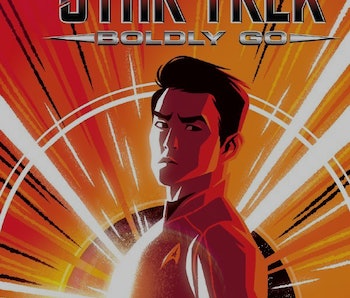 Hikaru Sulu is grappling with survivor’s guilt after a Borg attack in the next issue of Star Trek: Boldly Go. To be clear, Sulu is alive, but along with the crew of the original Enterprise, the Borg will have to be dealt with, particularly if Sulu is going to get his family back from their clutches.

IWD’s new Star Trek: Boldy Go series introduced us to the latest paths of the USS Enterprise crew after the events of Star Trek Beyond. Boldy Go #1 had Hikaru Sulu as Commander under Captain Clark Terrell on the USS Concord before tragedy struck and the crew of the USS Endeavour had to come to their rescue. Captain Kirk and Dr. McCoy managed to pull Sulu and a few others from the wreckage of the Concord but couldn’t get to the scene in time to save Terrell and the crew from being captured by none other than the Borg.

Star Trek: Boldy Go #2 comes out November 9, but the opening panels have already revealed that the Borg carved up the Concord, taking the entire saucer section of the ship before disappearing with Terrell and the crew, including Sulu’s husband and daughter. It was a miracle that Sulu escaped, only doing so because Terrell had ordered him to the battle bridge moments before the Borg attacked.

Now, Sulu is back in place beside Kirk and McCoy, and it looks like Spock and Uhura will soon be joining them. The rebooted classic Trek crew has never taken on a threat of this magnitude before, so we’ll have to wait to find out if any of them will be assimilated, although it’s already been hinted that Spock will suffer such a fate.

Sulu’s narrow escape is both a relief and not at all surprising. Even in the 1960s TV show, Sulu wasn’t someone you wanted to mess with. His scrappy, blasé attitude — and his positive relationship with his crews — got him through every situation, thick or thin. So, we have hope Sulu will see his husband and his daughter again very soon.