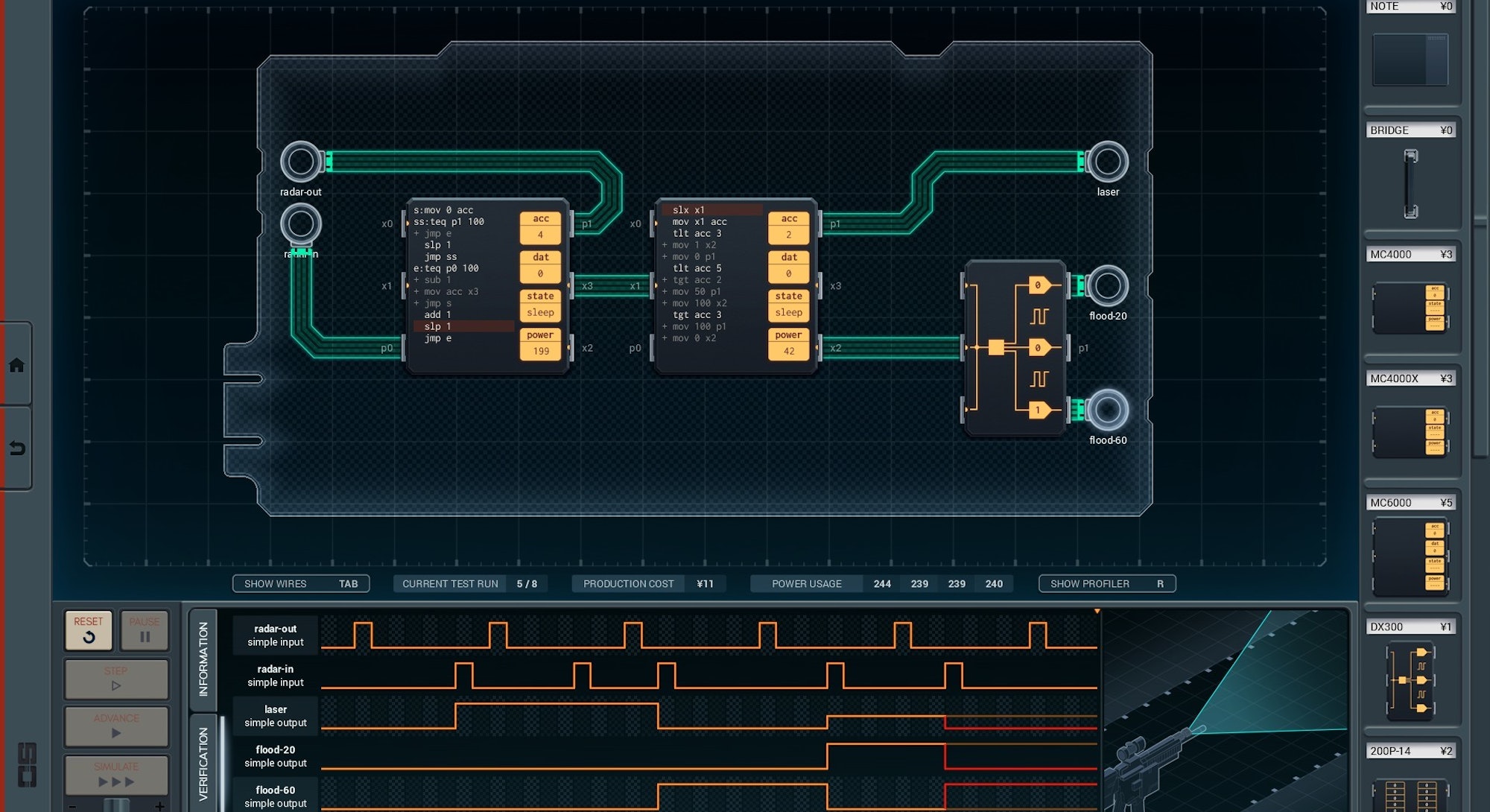 Zachtronics creative director Zach Barth is adamant that Shenzhen I/O is not an education game. Metaphorically, it’s like a cooking show, at least according to artist Matthew Seiji Burns. All the ingredients have already been prepared by some off-screen intern; all you have to do is pull the perfectly manicured turkey — skin crackling and golden — out of the oven. That’s not to say that Shenzhen I/O (and cooking shows) isn’t valuable. It is. Shenzhen I/O is a practice of self-driven learning.

But playing Shenzhen I/O won’t make you an engineer, nor will it teach you assembly language. Created by developer Zachtronics, Shenzhen I/O is an electronics and engineering simulator with its own in-game language, which, as it turns out, is fairly similar to assembly language used in real-life, just pared down to make it fun. Released in early October, Shenzhen I/O focuses on a new employee — that’s the player — at Shenzhen Longteng Electronics Co., Ltd. Set ten years in the future, the game teases out a narrative with the products players are creating: a pollution-detecting window, a meat-based printer, and a precision food scale.

“So much of programming is not fun,” Barth adds, even if you’re working on meat printers. “You know what’s worse than programming? Electronics.”

Real-life electronics add an element of unpredictability. Sometimes your tools just don’t work, they’re broken, or you have no idea what something does. That’s why Zachtronics just didn’t add those elements. And that’s what makes Shenzhen I/O not an educational game.

“That stuff fucking sucks, Barth says. “You can’t subtract out the stuff that makes it hard [in educational games]. If you really wanted to make a game about electronics, you’d have to take on all those issues.”

“Real learning happens in moments of playful exploration,” MIT professor Scot Osterweil told The Hechinger Report in 2015. Osterweil proposes that there are four freedoms of play at work in learning: freedom to experiment, freedom to fail, freedom to assume different identities, and freedom of effort. Traditional education focuses on repeating facts and making grades; therefore, educational games have been modeled to reflect those ideologies. It’s about transferability. And Zachtronics, as a whole, doesn’t value traditional transferability — unless the company’s coming at it from an “abstract, creative way,” according to Barth. And it is with Shenzhen I/O.

Marked by a hesitance to teach players how to actually play Shenzhen I/O with a boring tutorial, Zachtronics created a manual to do that job: a dense, mandatory manual that ships alongside the game. (Printed manuals in binders were available with the limited edition version, though a PDF is available, too.) Shenzhen I/O doesn’t have a tutorial in the traditional sense, then, unless you count an email that tells players to pull out their manual and get reading. Besides that, there’s nothing in-game telling players how to move pieces or when to push a certain button. Players that don’t read the manual will simply get lost.

Shenzhen I/O’s manual is filled with helpful information but also nonsense; nonsense that makes reading the manual fun and also a puzzle game. Players themselves must dig through the pages as they work through the game to determine what they need and what they don’t. And it’s a teaching strategy Barth wasn’t sure would work.

Most developers, presuppose that players won’t even open a manual, if they’ve even got a physical copy. For Zachtronics, shipping a game that requires players to get familiar with a manual was a risk, but one that paid off. With it, Shenzhen I/O cracked the door on transmedia learning; perhaps a restriction to some, but for others, taking play off of the screen is a practice of freedom on all four counts: Experimentation, failure, identities, and effort.

The nature of Shenzhen I/O’s puzzles are part of that, too. Each electronic device is its own puzzle that asks players to piece together circuits and parts with lines of assembly code; each is open-ended, giving players multiple options for solving. Experimentation is encouraged in regards to power and cost needed for completing a project. Effort, too, is important with regard to power and cost; players can get by with less efficient means of production if thats how they choose. Shenzhen I/O isn’t testing its players, just asking them to complete projects. Barth says that this is embedded in their design process and a core tenet of their games. Solutions just aren’t the focus, but instead it’s the process of getting to that solution, and making that rewarding.

Drawing a player into its inner workings isn’t hard if players already like electronics and engineering. But what if they don’t? Thats where Osterweil’s freedom of assuming different identities comes back in. Shenzhen I/O isn’t exactly an engineering simulation. It’s a game, and that’s what games do: allow players to be something else. Zachtronic’s brand of immersive storytelling as displayed by its dedication to selective authenticity is effective in rewarding players. Solving puzzles feels good. It feels like you could actually be an engineer, even if that was never really a player’s goal. Barth wants his players to feel like wizards when they solve certain problems.

To be clear: Playing Shenzhen I/O won’t make you an master engineer; the language you learn in-game does not work like modern languages. In fact, playing any sort of video game — whether or not it says it will or not — will not make you a programming or engineering wizard. If that’s the goal, it’s best to just do it — make a program. But video games, like Shenzhen I/O with its pared down assembly language, can be a novel way to introduce players to the sort of logic that makes great programmers great.

“Other programming languages have very complex syntactical constructions,” Barth says. “In assembly, there isn’t. It’s one construction after another.”

Assembly languages are linear is a way that other languages aren’t — even more so in Shenzhen I/O. Removing the complexity from the language used in-game allows for Shenzhen I/O’s core concept to emerge: problem solving. It’s a puzzle game, after all.

Becoming self-sufficient in Shenzhen I/O — being a good employee at its fake Chinese company — means more than rote memorization. It’s an exercise in computational thinking, which is good not only for engineers, but those who aren’t, too.