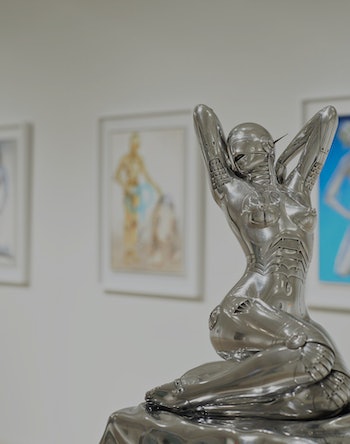 The images of the sexually notorious and robotic call to mind Futurama, which made a running joke of preserved celebrity heads in jars. But creating robots based off some of the world’s most memorable entertainers is starting to sound less like sci-fi and more like reality, especially when we already have holograms of people like Tupac and Amy Winehouse. Why try to catch sexy lightning in a bottle when genetics has already done the hard work?

Sorayama isn’t just a painted. Some of his work exists in three dimensions and these forms feel even more inevitable, despite being somewhat sarcastically designed. One of his creations has an outlet plug in the crotch, just waiting for electricity to be surged into it. Other robots are wearing bikinis and posing like pin-up girls. There appears to be one human women in all of the pieces, riding a mechanized Pegasus away from a squadron of evil pterodactyls. She’s topless, presumably for practical reasons.

The most striking piece in the gallery is the aluminum sculpture named “Sexy Robot.” It’s basically one of the paintings realized IRL. It’s peculiar to see something that is sexy in the way women can be (an ecstatic expression and a round butt) and also in the way that a car can be (those heat vents tho!). This is manufactured sexuality, a crowd-pleasing corner of engineering, and it’s something we need to get used to.

Fantastically campy, the exhibition parallels society’s search for pleasure through technological advancements. Yes, Sorayama’s pieces might not be identical to the human-like robots that have started popping up in entertainment, but this doesn’t feel like a show about fiction. It feels like a show about aspiration. Perhaps it makes less sense now to fantasize about Kate Moss than it does to fantasize about owning a Kate Mossbot. That’s an unnerving truth, but the shine is still on it.