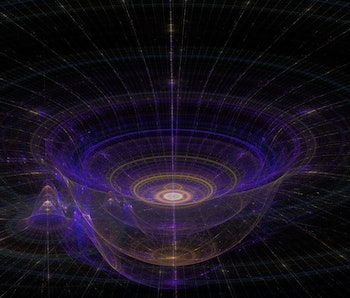 It’s hard to conceptualize space. Movies have made it seem flat and empty, sort of a Star Wars credits style flat plane of existence. But space is actually a lot like Earth, at least geographically: There are hills, valleys, deep pits that seem to fall into nothing, more powerful and consequential than perhaps any mountain top or canyon here on Earth. You just can’t see them.

In his new book, The Gravity Well, Sandford uses his 28 years’ worth of expertise in working on spaceflight and being at the forefront of the space industry to explain how humans ought to go about conquering the gravity well, one of the most impressive obstacles that has prevented humans from deep space travel.

What is the gravity well?

This is sort of my working definition — and I just sort of made this up — but I’m using the Earth-sun Lagrange point [the points in the orbital configuration of two bodies where another smaller object can maintain a stable position]. That’s why I say it’s a million miles.

The exact physical definition is not so important as the idea that space is not this black, black region — it’s got terrain. It has mountains and flat spots and valleys that we have to negotiate. If we play our cards right, we can go a long way with very little energy. If we play our cards incorrectly, we can spend a tremendous amount of energy to go not so far.

A lot of people think about space and they think there’s nothing there when that couldn’t be further from the truth. Not only is there terrain but there are wells, and there’s a lot of water. There’s actually trillions of dollars worth of minerals in space not too far from the gravity well.

What are other misconceptions about space?

Probably the biggest one is that it [space exploration] is expensive. The public investment in space [i.e. NASA’s annual budget] is $18 billion dollars. That’s a big number, but what I try to do in the book is provide a framework for that number just like I tried to reframe their mental model of space. The kinds of problems that the civil space program can help us solve are problems that we currently spend two orders of magnitude more on than what it costs to execute a civil space program. I’m including in my definition what I call an “audacious civil space program,” not the one we have now which simply maintains the status quo.

I make the argument that if we as a nation recognize these benefits and use the space program the way it can be used and the way it has been in the past successfully, we would reap these rewards and those rewards would be problems that we spend in total trillions of dollars to address every year. As a nation, we spend about a trillion dollars on education every year. Anything that can inspire a generation of people to go into STEM has a truly huge value to the century. If we have to spend 10 billion dollars to get that, that’s a lot of money, but it’s relative to the benefit and relative to how much we spend today on that problem. It’s not actually very much money. That’s the kind of re-framing I’m trying to do in terms of the cost of space.

Do you think that commercial space has been a big factor in persuading people to start taking these operations more seriously?

I absolutely think that it’s all tied together. I would suggest to you that there has always been a contingent of people working under the radar on the problem of going to Mars through the years that you may or may not have known about. Now that people like Musk are making this pitch to the public and the public is responding, I do think it helps.

What are some other obstacles preventing us from successfully and safely traveling out into deep space and conquering the gravity well, so to speak?

There’s so much that we need to learn how to do to be able to land people on Mars. Some of those things we have to learn how to do are surface-based activities like surface habitats and surface construction equipment and resource utilization. There are some things that actually simply happen in space. They’re in-space technologies and that has to do with communications and navigation and guidance and trajectory analysis. Highly autonomous rendezvous and docking. I should say highly autonomous and highly reliable on rendezvous and docking. Our [extravehicular activity] tools have to get better and more automated. For both in space and surface system, we need better life support.

Going 25,000 mph in space to going quietly and safely under the surface — we’re talking about trying to figure this out for a 15 to 30 metric ton payload, not a rover that’s under one metric ton. They’re incredibly large systems that we need for habitats and power systems and that kind of thing.

Then there are obstacles to the settlement as well. That’s where Elon Musk and Jeff Bezos and those guys come in because they are literally taking the systems that we use for exploration, and making it into a commercial system that will cost significantly less.

They’re doing amazing things to reduce the cost of access to space. Reusability in the design and launch of rockets means the manufacturing costs come down as well as the assembly and integration cost. When SpaceX launches a rocket, the mission control system is dramatically different than a NASA system. That lowers the cost. That’s probably the first thing that we need to work on.

What are the benefits of space travel?

One point I haven’t mentioned yet is the benefits of space on international influence. [President] Kennedy started the Apollo program not for economics or education — it was about international influence. His exact words are actually pretty poetic and meaningful and deserve to be understood. I think Apollo was extremely successful and may have been his biggest contribution to the victory of democracy and capitalism over communism as anything else.

More like this
Science
10 hours ago
70 years ago, the world united for a monumental scientific project — and kicked off the Space Race
By Doris Elín Urrutia
Science
6 hours ago
Look: ESA captures remarkable images of a “hedgehog” structure on the Sun
By Jennifer Walter
Science
5.13.2022 6:00 PM
Once a year, we get closer to NASA's Voyagers — here's why
By Elizabeth Howell
Share: